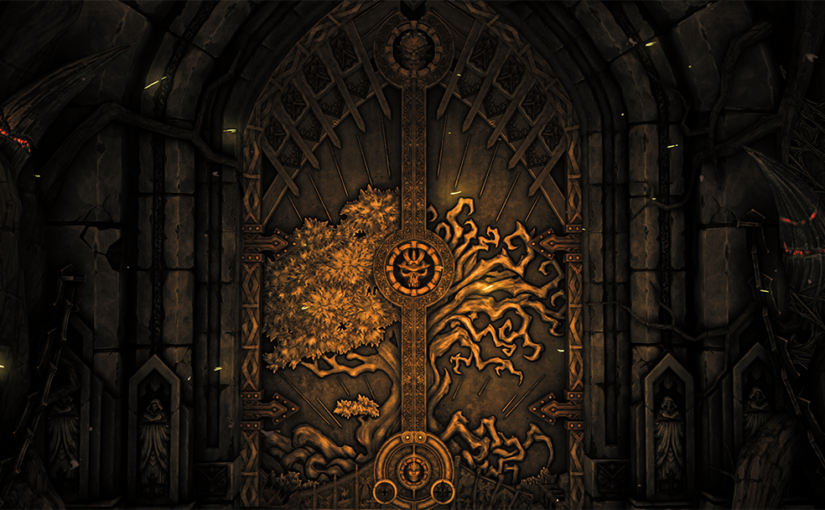 In Darksiders II, once Death reaches the Tree of Life and Death, he can admire the grand door that leads to the Well of Souls. The engravings on the door are pretty intricate, and for the most part, make sense. On the left, we have the Tree of Life, and on the right, the Tree of Death. At the base of the door are the keyholes for the two keys, one guarded in Heaven (the left) and the other in Hell (the right).

This is where things start to get interesting. On each side of the door, there’s a series of four images. On the left, they seem to depict some angelic business, and on the right, demonic. But some of them are rather odd and not easy to interpret.

Here’s the angelic side:

From left to right, we see:

Here’s the demonic side:

Again, from left to right:

A friend suggested that what we see in the engravings might be the story of the alignment of humans with Heaven, and of the Undead with Hell. It would go something like this:

Continuing on the demonic side:

I… am not at all convinced in this. For one, nothing in the game (which dwells on the afterlife quite a bit during Death’s adventures in the Kingdom of the Dead), indicates that the undead are allied with Hell.

And… would the humans even have existed at the time this door was made? On intuition, I’d assume that the door is as old as the Well of Souls itself, which (I would again assume) is as old as Creation. But on second thought, Heaven and Hell themselves aren’t that old (we know the Old Ones reigned before them), and there can be no doubt of their representation (they are the keepers of the two keys). Crowfather said the Well was sealed off and the key divided after the annihilation of the Nephilim, in fear that someone might return their souls to the cycle of life and death. Is it then reasonable to assume the door was erected at that time? Yet the appearance of Draven, who is recognizable, and human, and already dead in the engraving, is good evidence that the engravings, at least, were done even later. Unless, as the same friend suggested, the engravings were a prophecy.

Another problem with this theory is that the final element of the door design — the faces — doesn’t fit with it (or with any other sensible narrative I can think of). Bottom to top, these are the three faces in large circles straddling the seam:

My reflex here was to guess that the first face represents angels, the second the undead, and the third, demons. But the third face doesn’t look like a demon. It looks… like a human? The pointy things on the sides, that might appear to be ears, are actually hair and beard. It bears no resemblance to any character or enemy I know of in the series.

If this isn’t a demon, then the first one might not be an angel. And indeed, if you look at it closely, the circlet on its brow doesn’t really resemble angel armor, and the “tattoos” on the face don’t resemble angel tattoos (which mostly seem to be asymmetric and/or rune-like).

The middle face, at least, seems unambiguous. But what’s the story here, if any?

Here are some possibilities. The faces may represent the un-allied races. Makers (bottom), the undead (middle) and… Nephilim? — or some other race that no longer exists (top)? Or, the bottom, vaguely female face, might be Eve; and the top, Adam. But that seems cheesy, overly human-centric, and Adam and Eve have never figured in Darksiders. The idea I favor is that the faces somehow represent the circle of life and death. The top face being old, the middle dead, and the bottom young (reborn). This at least fits with the overall theme. But it’s far from convincing.

Of course, the most likely interpretation is that the artist who was tasked with designing the door ran out of ideas and/or was not familiar enough with the setting to use existing concepts, so they slapped some random stuff on it. This would also be the easiest explanation for the appearance of Draven with Lilith, though that might’ve been intentional, as a sort of an easter egg.

Random elements or not, the design as a whole was probably intended to evoke a certain mood, rather than to be scrutinized and understood. I realize it’s impossible to get to “the truth” here. But it was fun to try!

All the lovely screenshots were made by AlphaGravy.