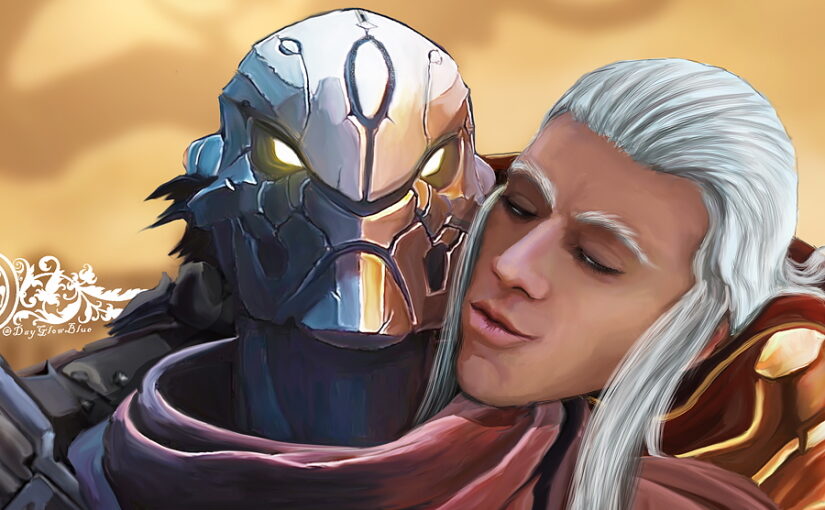 The crowd cheers, rising from the seats of the marble colosseum in a blinding wave of white robes, whiter hairdos, and a flurry of white wings, as another challenger bites the dust.

Yeah, it’s exactly what it sounds like. Pigeons have their own version of the Arena. They call it “The Dueling Grounds”, and the list of rules is so damn long I got dizzy just watching the scroll unfold. The first one, of course, is that only angels are allowed to fight. Pfft. And he asks me why I feel more at home in Hell despite the heat. There is no place in all of Creation more inclusive than the pits of the Arena. Everyone is welcome to bleed and perish there, bird and bat alike. Here, you’re not even allowed to die.

The rule saying that Horsemen specifically aren’t welcome even as spectators was scribbled on the margin in a hasty, shaky hand and blotted with blood stains. I wonder which one of us was it. If it was me, I was too drunk to remember.

Either way, we had to sneak in through the back door. War knows a guy who knows the girl with the keys, so we were hush-hushed up here, to a wide balcony littered with feed, filth, and long, tawny feathers, where the bigwigs park their rides. A few beasts groom and doze within easy reach. Not a bad place to be, should we find ourselves in need of a quick exit. And it’s got a great view.

The crowd erupts into another standing ovation. “What is this, the third?”

He seems pleased with the spectacle. Standing still while watching others fight isn’t really my idea of fun, but I’m glad I let him talk me into it. Now and again, I see him twitch with muscle memory as his body goes through the motions of ages-old angelic training. His monstrous sword, which lights up from time to time together with his brand, is just as eager to show the duelists how it’s really done. It’s kind of creepy, but I’m not gonna lie: I light up too when I imagine him fighting down there.

“And… fifth,” I mutter, casually stepping closer till our shoulders brush. “She’s good.”

“She is the best we will see today. Mark my words, brother: if I were a betting man, I would be betting on her.”

Now that’s an eyebrow-raiser. “I’m a betting man. How ‘bout I disguise myself and—”

“No. I promised Dalaquiel we will cause no trouble.”

“I won’t cause no trouble. No one will even—”

He pries his eyes from the fighting to look at me. “Strife.”

Ah, damn. Wish he yelled at me, then I could put up a resistance. But I can’t say no to him when he uses that voice on me.

He puts his right arm around my shoulders, but we both turn our attention back to the arena as a gasp propagates through the audience. The newest challenger has managed to land a decent blow, but the pretty angel lady recovers in time for the collective inhale to turn into a sigh of relief and a round of scattered clapping.

“You think she’d stand a chance against you?” We both know the answer – it’s just an excuse to hear the rumble of his voice again. But when I glance up, I see his lips curl.

“I’ve beaten her before.”

“She is Uriel, recently of the Hellguard. What of it?”

“Wait. You fought her… but she still lives? With all her limbs?” I scratch my head. “Doesn’t compute.”

War shrugs. “She was but a child when our paths first crossed. I spared her life.”

“First crossed? How many times did your paths, and who knows what else, cross?”

Did he just laugh? And why do I suddenly feel the urge to get down into the arena and show the pigeon girl how it’s really done myself? I try to worm away from him and his smug smirk, but he pulls me closer, embracing me from behind, and leans down to whisper in my ear: “You almost sound jealous.”

The crowd cheers again as Uriel, recently of the Hellguard, beats her seventh opponent.

“How many does she need to defeat before she gets to be the supreme angel champion or whatever?”

War grunts with something like amusement. “I don’t believe there’s a limit.”

Of course. The one rule that would actually make sense, they left out of their god damn list. War might not be a betting man, but he knows how to size up a fighter, especially one so intimately familiar.

This is going to be a looooong evening. I groan. “Kill me now.”