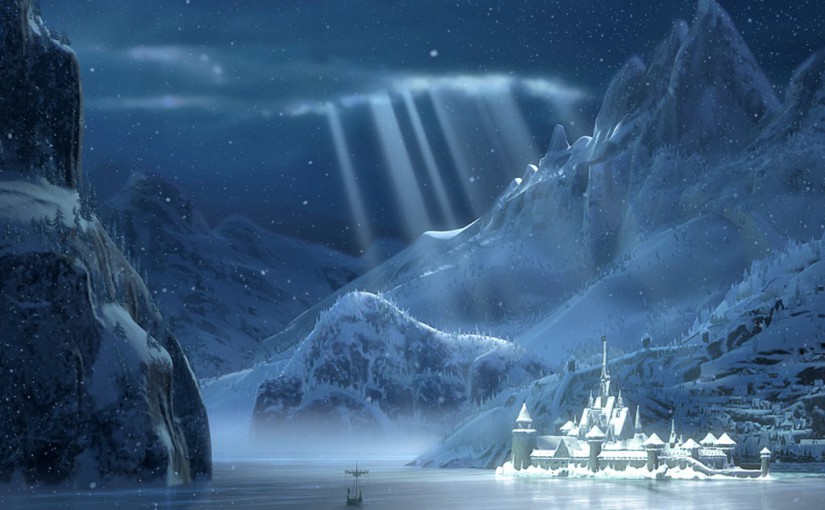 It’s been years, or so it seems, since I last watched a Disney cartoon. It’s still weird to see the 3D models and connect the computer-generated imagery and modern-like impressions to what I remember adoring as a kid. The last one I really got into was The Lion King, I believe, and that was back in the 90s. Things have changed, and I don’t mean only the visuals. The themes, the references to Real Life, the humor – it’s all new, and, to borrow my own words from Fruit from Palaven, it makes me feel old.

Frozen is, strangely enough, not about melting the heart of the ice queen, Elsa. I had a firm expectation since the very beginning that it could go no other way – but I was wrong. And not just about that. Obviously, love plays an eminent role; but while I expected it to be romantic, it turned out quite differently. And the main villain, who only emerged near the end, was a complete surprise. Perhaps I’m just that naïve, I don’t know. I thought the point of that particular subplot would be ‘it’s ok to trust your heart even when your older sister (or whoever’s in charge) doesn’t approve of it’, which I’m pretty sure summarizes at least half a dozen old-school Disney cartoons. But not this one.

Mind you, I’m not complaining. Surprise is good. Unorthodox is good. I actually liked Frozen a lot. Mostly for Elsa. She’s so deeply fucked up, it’s difficult to believe someone put her in a movie that’s ultimately targeted at kids. Elsa is a maladjusted, isolated introvert with volatile emotions and serious self-control issues. Her discipline and sense of duty break down in the first encounter with social and emotional burdens normal people deal with on a daily basis. On top of it all, she’s just plain dangerous. She keeps hurting people she cares for, and nothing she does seems to set things right. Perhaps it’s no wonder I found her impossible to resist. I wholeheartedly approved of her retirement in the ice fortress. “I’m alone, but I’m free!”  But then there was Anna’s retort: “No one wants to be alone.” And that, I suppose, is the main point of the story.

Two subtle moral issues nag at me from a distance. For one, I’d have preferred it if Anna’s love at first sight did turn out to be true. Why the hell not? Aren’t fairytales supposed to keep our faith in such things instead of stomping on it? The other is more serious. Elsa is an extreme and dangerous character, and I’m not 100% ok with her getting away with it just like that. What does that tell the viewer? If you’re special, you can do whatever you want, be it inflicting physical and emotional pain to people around you or outright jeopardizing an entire town, with nothing to fear in the way of consequences? Sure, anyone can see that she regrets her actions, that her intention was not to harm. But while I wouldn’t substitute the happy ending for a tragic one, some indication of a lesson learned and a few scars earned would have gone a long way to set this right.

But these are nitpicks. I liked it so much I’m tempted to see it again. It made me wonder and ponder ice fortresses of my own. Oh, and that song is contagious. Can’t get it out of my head!