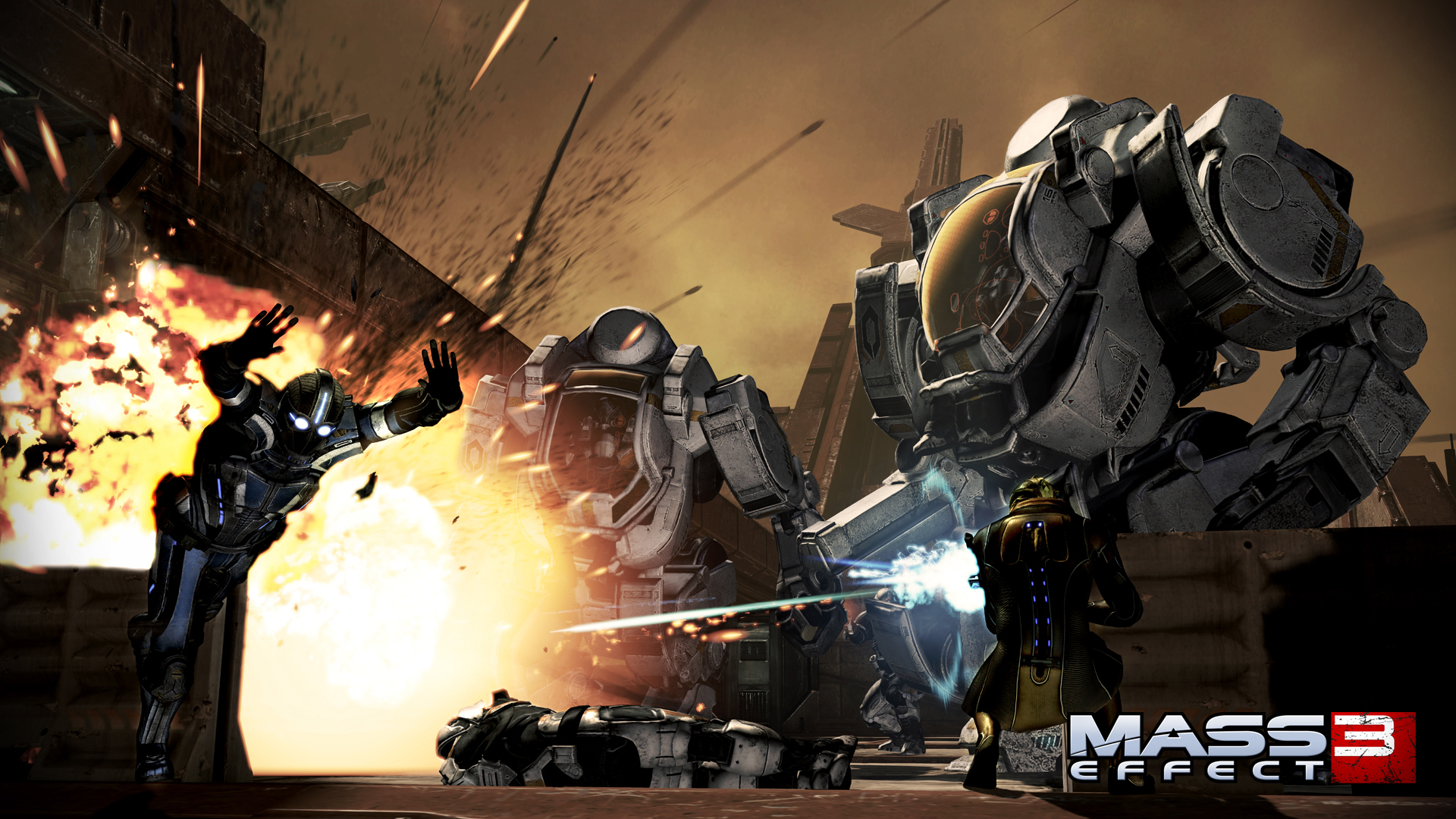 It took more than 15 years of gaming and internet presence, but it finally happened: I got addicted to an online game. The game is, of course, Mass Effect 3 Multiplayer. I’ve been playing daily for a couple of months now and the impressions have long since coalesced. There are good things and bad things about it, but overall it’s unbelievably fun, subtly competitive, and obviously, addictive.

Let me start with an intro, for those of you who have – unthinkably – not tried the multiplayer yet. (For a long-winded intro to Mass Effect in general, look here.)

Each match is played cooperatively by up to four players on a single map, and consists of eleven “waves” of increasing difficulty. When a wave begins, enemies spawn on the map, and the goal is to exterminate them and survive. Waves 3, 6 and 10 also have timed missions, where the team is expected to collect or activate items or kill specific enemies. In the end, the team is “extracted” – provided they survived. Successful missions are rewarded with credits and experience, which are divided equally among the players after the game is over.

Experience is used to level your avatar(s) up, and the credits can be used to buy new weapons, equipment, or unlock new characters. A brand new player will start with nothing but the basic weapons and human characters unlocked (plus/minus a gift pack from Bioware), and can either earn credits for new items and improvements by playing – or by buying them for Real Life currency through an online store. However, you can’t buy specific things (not even for Real Life money). You can only get “packs” with random items inside. More expensive packs will get you better items, but there’s no predicting what exactly, which makes getting equipment difficult for people who only play occasionally. 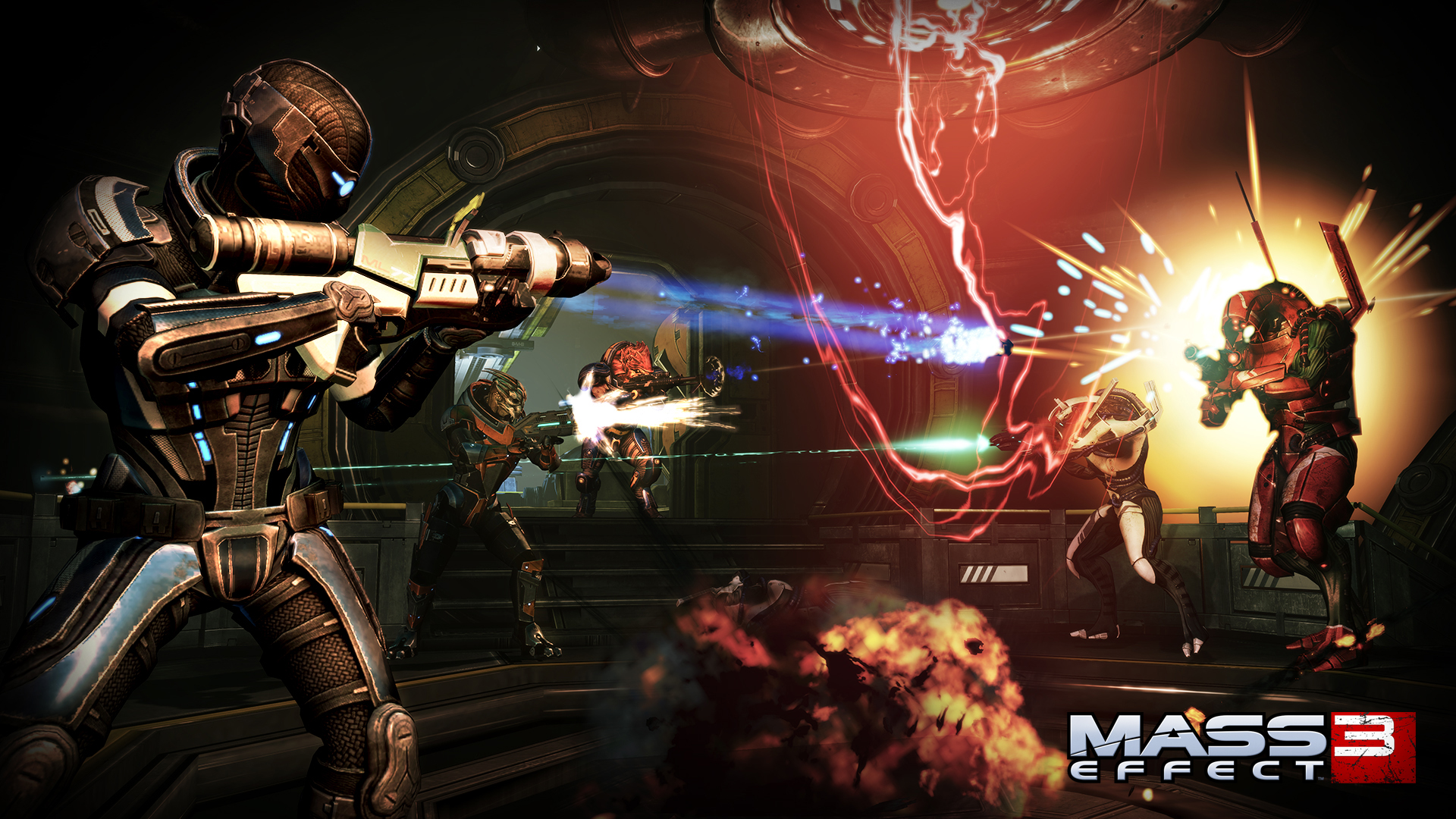 You can choose your avatar among different characters in the six basic Mass Effect classes: adept, soldier, sentinel, engineer, infiltrator, vanguard. Each class has its signature abilities (for example, all sentinels have tech armor, and all vanguards have biotic charge), but characters within the same class are differentiated by racial modifiers (for example, drell have less health and shields than other races, while krogan have more), and individual abilities in a way that significantly affects gameplay. Not all characters are equally unique, and after playing several turian characters, one might find that turians of all classes play similarly. But even so, there’s plenty of variety to go around, especially when combined with different builds and styles. For instance, most infiltrators can be played either as long-range or short-range combatants, and can specialize either for carrying out missions, or dealing great amounts of damage to enemies. Similar options exist for most classes.

Gameplay doesn’t bare much similarity to the single player campaign, where the usual goal of a level was to traverse it, from one end to the other, clearing it of enemies in the process. In multiplayer, the fighting takes place on the entire map. Depending on who plays, and on what level of difficulty, there can be clusters of combat centered around individual players, or everyone might stick together and concentrate firepower. Most of the time, you’ll want to have the enemies where you can see them, and be fairly certain there are none behind your back and at your flanks. Once you’re in a relatively safe position, you’ll want to shoot them with your weapons and powers as fast as you can. Like in the campaign levels, there’s plenty of cover. However, there are only a few places in all of the maps, where you can sit and defend yourself from one spot indefinitely. Enemies are smart and will try to flank you. Moving from one safe spot to another is often the best way to survive, but it takes some tactical awareness, knowledge of the layout, and quick thinking. Many experienced players that I had the pleasure to observe either in live or recorded games don’t make much use of ‘hard’ cover (the kind where you crouch behind something or stand with your back to a wall), but instead use smart positioning to keep themselves out of the line of enemy fire. On the other hand, hard cover recovers shields, helps aiming, and can significantly reduce damage from grenades and stray shots.

It’s easiest to die when in a crowd, and wherever you turn, you run into more enemies. Dying isn’t the end of the world, though. After being shot down, you can spend a medigel to revive yourself; medigel is an equipment item you get in the aforementioned packs. Alternatively, your teammates can revive you at no cost, provided they manage to get to you during the allotted time, and provided there isn’t a crowd of enemies around you, which would make reviving you risky. Situations where one player dies on top of another, trying to save them, are not rare at all, and sometimes entire teams will end up dead together. Not all people I talked to are happy with the dying/reviving mechanic, but I find it a great device for imposing teamwork. At lower difficulties, reviving teammates is almost always possible; at higher difficulties, one needs to carefully evaluate the merit of risking themselves to save another. 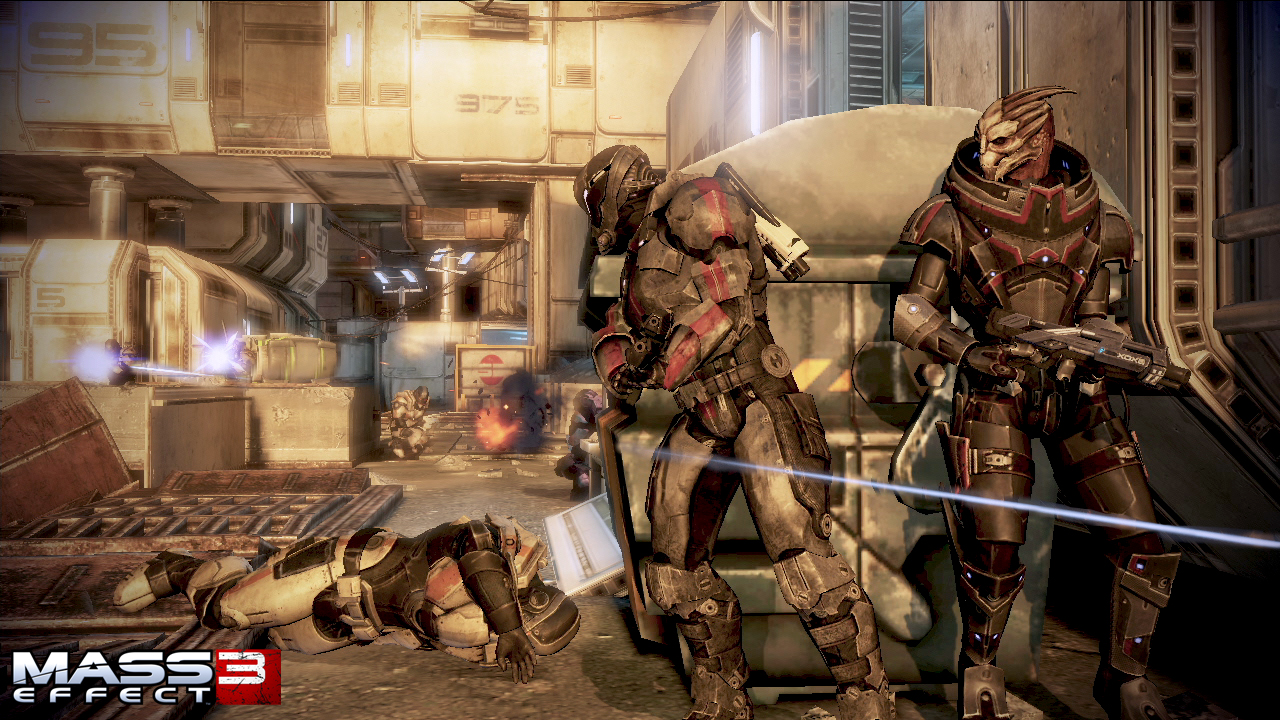 There are four levels of difficulty: bronze, silver, gold, and platinum. The first three challenges differ in toughness, number and sort of enemies that spawn in each wave (on bronze, the armor-hardened units will only appear after, say, wave six, while they’ll enter at wave two on silver), and also in penalties on the players, like delayed shield regeneration. There’s a palpable difference in the time it takes for one team to complete games of growing difficulty: where a bronze match may end in 10 minutes, a silver usually lasts around 20. Platinum difficulty is different from the rest in that enemies of all factions (the factions being cerberus, geth, reapers and collectors), spawn at the same time, which I find ridiculous, lore-wise, so at the moment I can’t see myself playing that even once my skills allow it.

There are two ways to set up a match: a quick match with random people, made by a search engine; and a private match with people from your friends list that you invite. I mostly play with random people, because, unlike me, the people on my friends list are hard-working individuals who also Have A Life. In the hundreds of games I played with random teammates, I’ve encountered only a handful of problems, which all boil down to some sort of lag. There are days when the connection to the game seems generally unstable, and being disconnected in the middle of a match is extremely annoying. Overall, though, I don’t have a lot to complain about – on that front.

Playing with friends is a whole different matter, I’m sad to say. There’s some elusive problem that sometimes makes joining a friend’s game impossible. Sometimes it becomes possible after restarting the game, but it’s not guaranteed. It’s enough, however, to make for a lot of restarts and a lot of frustration when things don’t work out from the start (and they rarely do). The worst of it, of course, is being forced to give up a prearranged game after hours of unsuccessful attempts. Now, I dare say my friends and myself are a rather tech-savvy group; we tried all sorts of experiments, including talking to the EA technical support, to no avail. We’re not the only ones having this issue – there are plenty of people on Bioware forums complaining of the same. But the problem persists. It’s the one serious objection I have to the game. It repeatedly made me feel ashamed for recommending it. 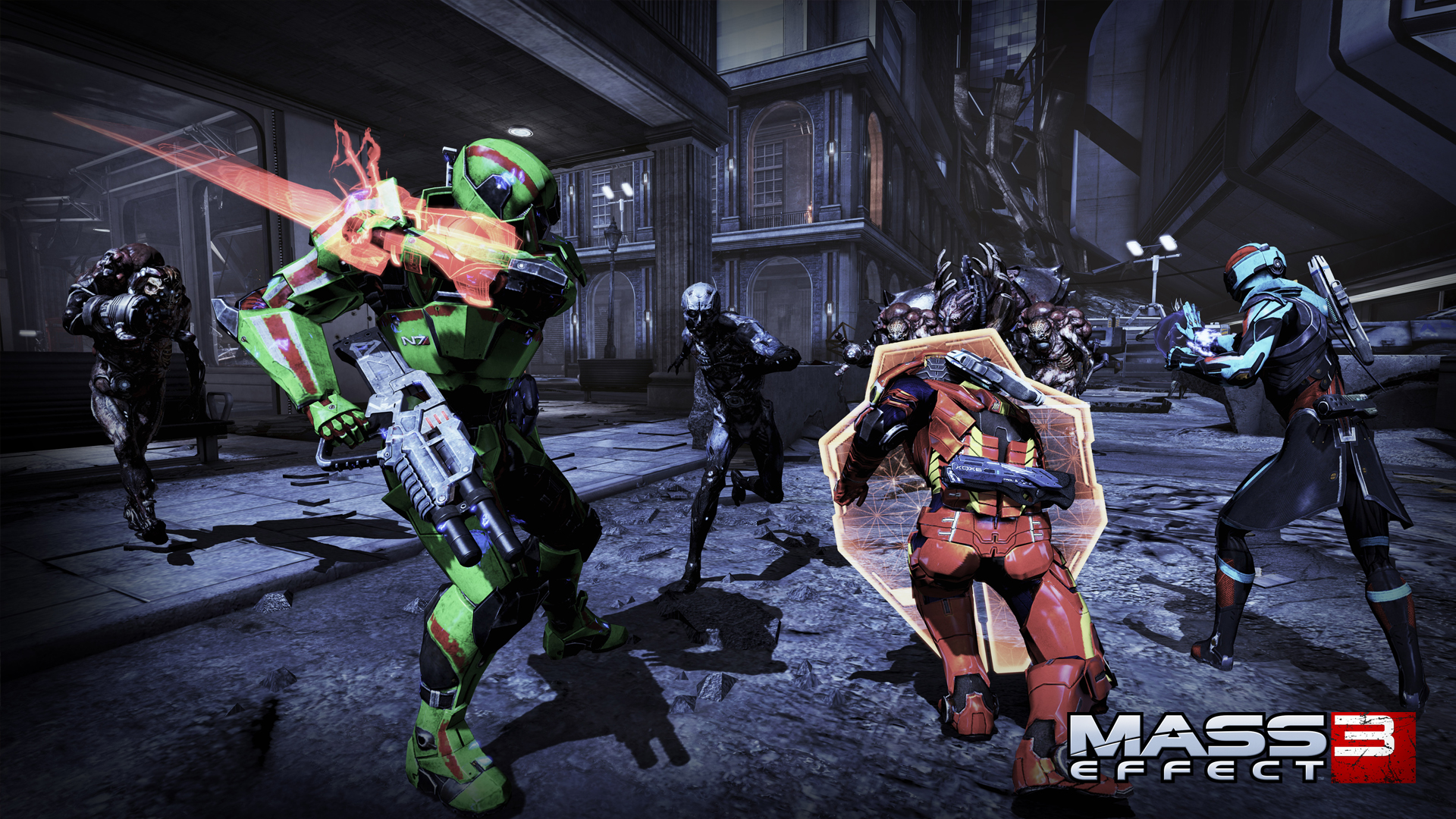 However, I’m still playing. So far I’ve mostly played on bronze and silver, but I recently gathered the courage to tackle gold too. I can’t claim I’m good; let’s say that most of the time I don’t suck too horribly. The amount of suckage depends primarily on what character I play, and secondarily, on who I play with. As in other role-playing-like games, I like versatile characters with varied skills, so it’s not surprising that my favorite character is the turian sentinel, who’s also the only character I took to gold so far. Besides its obvious advantages, versatility simplifies teamwork. See, one of the aspects of the game I enjoy the most, is the possibility to set up and trigger ability combos. With some classes, you can do this yourself, but it’s a lot more satisfying to do it in collaboration. The turian sentinel can take part in both tech and biotic combos, and has something to offer to almost any team.

Teams of random people vary greatly in enjoyment potential. I like playing alongside people who seem interested in teamwork, who don’t shy away from using voice chat, who patiently wait for others to level up between games, and who don’t switch teams after every game. Playing with the same crew for an entire evening is an experience far superior to playing with five different groups – provided it’s a good crew, of course. And yet, it doesn’t come even close to playing with friends, despite the connection issues and the cruel time-zone differences.

To wrap it up, I’m loving it. I play pretty much every day. There’s this site where you can track any player’s progress, among other things: the N7 HQ. My nickname there, and on Origin, is, predictably, Smehur. Send me a friend request, and I’ll gladly play with you.