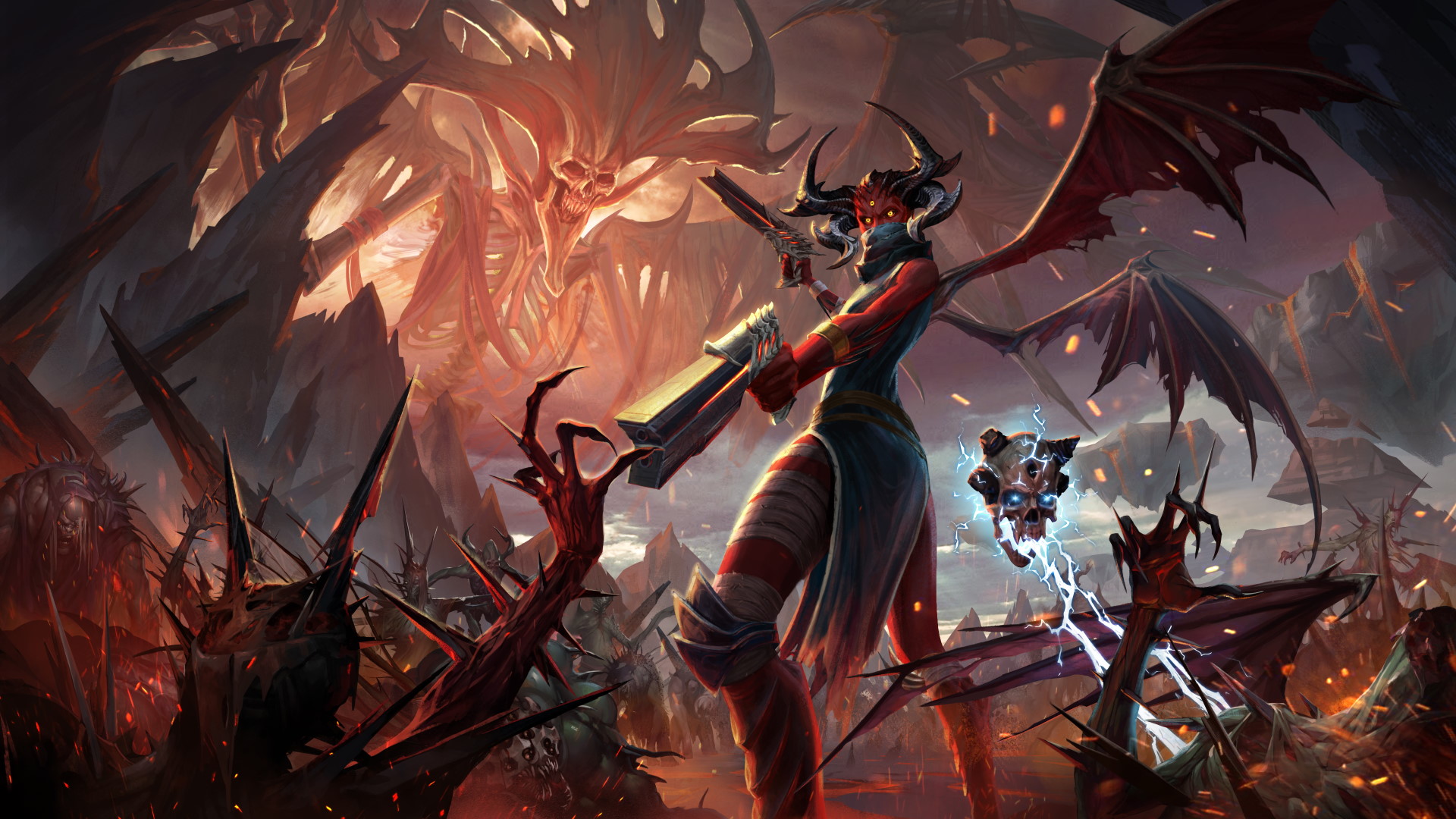 This game has been an absolute delight. It’s a rhythm-based first-person shooter where you play a demon-like creature wrecking havoc though the circles of hell in search of her lost voice. The rhythm-based part means that you’re supposed to shoot (or otherwise hit) enemies, reload your weapons, jump and dash to the beat of the music. This is not only great fun, it’s also built into the mechanics. Following the rhythm helps build up the fury level, and two good things happen when it gets high: you deal more damage, and you get to hear more elements of the music arrangements.

The music is awesome and perfectly tailored for the visuals and the narrative. (Or was it the other way around? Hard to tell!) Shooting things to its beat was incredibly satisfying and something I’ll be revisiting. Every level can be replayed whenever, and there are leaderboards to help gauge your performance in the way of additional motivation. There are also optional challenge levels. I completed most of these, but not all, as they are quite a bit harder than the story content, which I finished first. With four levels of difficulty (Lamb, Goat, Beast and Archdevil), Hellsinger has considerable replay potential.

The narrative is quite slim and remains vague to the very end. It’s delivered by a talking skull, Paz, which you pick up along the way and can use as a weapon, but his true role is that of a companion. As you progress through the story, he regains long lost memories, struggling (together with the player) to make sense of both the past and the present. The style of narration and the deliberate sparsity of detail reminded me big-time of another game with an awesome soundtrack — Bastion. The themes of lost memories, rebirth and cycles, reminded me of Torment (though the talking skull definitely helped form that association).

But the main association, which has been tugging at me since I first saw the demo for Hellsinger many months ago and ultimately made me buy it, is with Darksiders.

First, your demon avatar’s favorite weapon is double pistols, and like everything else in Hellsinger, they’d fit right in in Darksiders.

Second, your demon avatar has glowing yellow eyes and, more importantly, has three of them. She also wears a shabby scarf and hides her face. In a word, she could be a gender-swapped Strife.

Bonus points for the ultimate ability that comes with the Hounds: it spawns a clone of your avatar! It’s more of a fire clone than a shadow clone, and it’s geared more towards damage-dealing than evasion, but still! It’s uncanny.

Third, thematically, it’s practically the same universe. Heaven and Hell are for real and poor, ignorant humans are poised to be crushed in a conflict between them. Angels aren’t synonymous with good, demons aren’t synonymous with bad, there’s a fair mix of both on either side, and whatever was responsible for creating the world, has gone missing and left its creation in a mess.

I realize that these similarities are due to deriving from the same source and not necessarily in line with the intentions of the authors. But all the same, they’re there and — fourth — they’re amplified even further by the visuals. You’ve got ice levels, lava levels, green-tinted catacombs and postapocalyptic ruins. Any of them would make an entirely appropriate setting for a Darksiders game.

Basically, Hellsingers is two hairs and a breath away from actually being a solo-Strife Darksiders IV.

Well… I’d expect more in terms of story in Darksiders IV, and I’d definitely expect Strife to have a voice (and not just any voice: the voice of Chris Jai Alex, who shined in this role in Darksiders: Genesis). And more exploration, and third-person view. Oh, and a horse.

Alright, I admit that was an exaggeration. But you get my point.

To be clear: while it’s possible that I would not have picked up Hellsinger if not for the Darksiders association, I would’ve absolutely enjoyed it just the same. It’s a phenomenal game all on its own and the Darksiders vibes were just a bonus. The only objection I’ve got is that it’s too short. It took me some 8 hours to complete it, but I’ve no doubt that someone more adept at shooting could’ve done it comfortably in 6, and I heard it can be speed-ran in 4. But aside from the numbers — I simply wish there was more! About twice as much would’ve been perfect.

From the way it ends, there’s bound to be a sequel. That will be an instant-buy. In the meantime, it’s possible to mod the game with music of your own.

I’m sure you’ll never guess what that will be in my case.