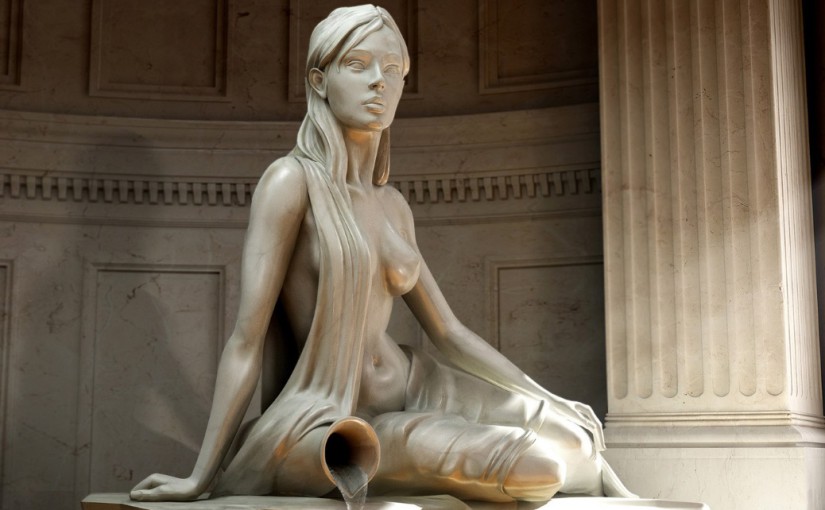 A book by Tim Powers that I just finished reading. I’ve read another one, “The Drawing of the Dark”, this summer, so I thought I knew what I was getting into; but “The Stress of Her Regard” surprised me in several ways.

At the very start, I was surprised by the intense spookiness. I went in expecting a fantasy, but for a while, it read like a horror. Just like in “The Drawing of the Dark”, the writing effortlessly translates into imagery; reading feels like watching, almost to the point of jumping at sudden noises. The scene that sets everything in motion – the one with the thunderstorm and a statue, for those who’ve read the book – is painted so clearly in my mind’s eye that if I had the skill, I could reproduce it down to the tiniest details on canvas or film, and I don’t think I’ll be quick to forget it.

The clarity of description, the fluidity of dialog and action, are remarkable. It is as if the author himself wrote not from imagination, but from actual observation, relating, step by careful step, events that have actually happened. It seems like an obvious, trivial component of any good story, but honestly, this is the first time the thought occurred to me. I heard somewhere that Tim Powers plans every detail of his novels meticulously, and perhaps my impression comes from simple physical plausibility?

Which is, I hurry to add, not the same as logical, nor psychological plausibility.

There were some moments in “The Stress of Her Regard” when I thought, “Come on; nobody would do that.” When taking up a fantastic story, the reader agrees to suspend their disbelief and not question various alien and supernatural phenomena; but accepting strange, implausible behaviors of characters is another matter altogether. The author failed to persuade me that the imagined people he set on the stage are capable of doing, or even conceiving of doing certain things that they are portrayed doing in the book. The most prominent example, that went as far as to make me uncomfortable on account of going too far, being too much, was the scene where one of the characters bites off the tip of their own finger; the action could have been plausible in a life-or-death situation, but the situation described in the book didn’t come across as such. Instead, the whole thing acquired an air of… parody, and it took a while to start taking it seriously again.

Similarly, I was not entirely convinced that the feelings of the lead character for his loved one could plausibly shift from one extreme to another as they do in the book. In general, the penetration into the minds of the characters is oddly unbalanced: while we get to hear most of what they think, we don’t really get to hear how they feel, unless the feelings are a reaction to whatever is presently going on and thus reduce to fear, exhaustion, revulsion, or at best, temporary fits of erotic passion. It’s completely out of the sudden that we learn the lead character “loves” his chosen one; and no matter how many times the claim was repeated after the initial revelation, I never quite believed the sincerity of the emotion.

However, neither of the two complaints above managed to seriously disrupt my enjoyment in the text. I came back to the book each day with an unwavering interest: what weird thing was to happen next? Also, knowing that TP’s fantastic stories offer alternative explanations for real, documented historical events raises yet another kind of curiosity: what did actually happen? What dark muse inspired Byron and Shelley to write such gloomy verses? I seriously intend to collect all the splendid bits of poems quoted at the start of every chapter, then find and study the originals, bearing TP’s strange interpretations in mind.

Another deviation from my expectations based on “The Drawing of the Dark” was the subtle sci-fi vibe maintained by scattered hints at silicon-based life and electromagnetic nature of various fantastic phenomena. I can’t decide if the intention of the author was to use them to add one more layer of plausibility to everything, or to simply get deeper into the spirit of the timeframe of the story. For me, they were an independent source of fun and food for thought. Especially interesting was the unique take on the famous riddle of the Sphinx; I’m not entirely sure I figured it out.

All in all, the richness of imagery and imagination, the skillfully woven plot, and the undisputable mastery of words made up for an addictive combination. I’m looking forward to picking another book by TP, knowing that I won’t be disappointed.