Nihlus turns a full circle, staring, unseeing, at the objects surrounding him, too familiar to spark interest or insight.

Saren stands by the door, leaning on the wall with his arms crossed and one leg bent at the knee. An uncharacteristically causal posture. He’s playing with Nihlus. The smirk that doesn’t quite reach the eyes confirms it.

END_OF_DOCUMENT_TOKEN_TO_BE_REPLACED 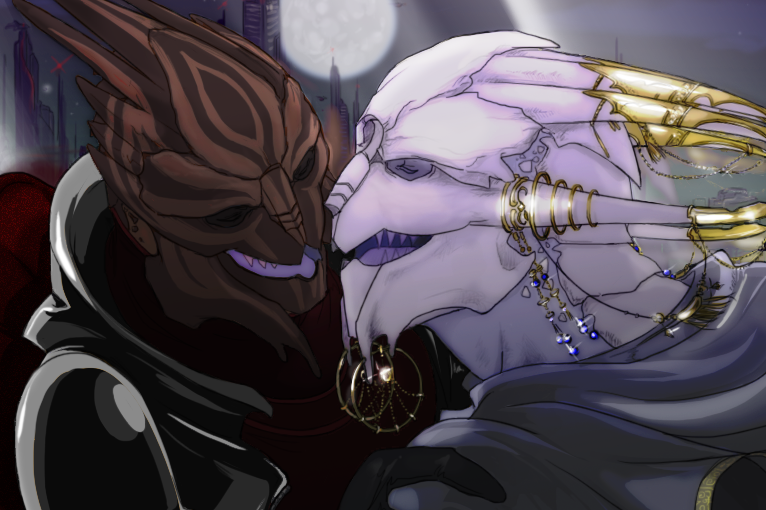 In which Saren allows Nihlus to explore his jewelry box and an obscure corner of his internal world.

Inspired by another wonderful artwork by my dear friend, Sixtus, titled Kiss.

Read Bejeweled here, or on AO3, or on FFN. Hope you’ll enjoy! 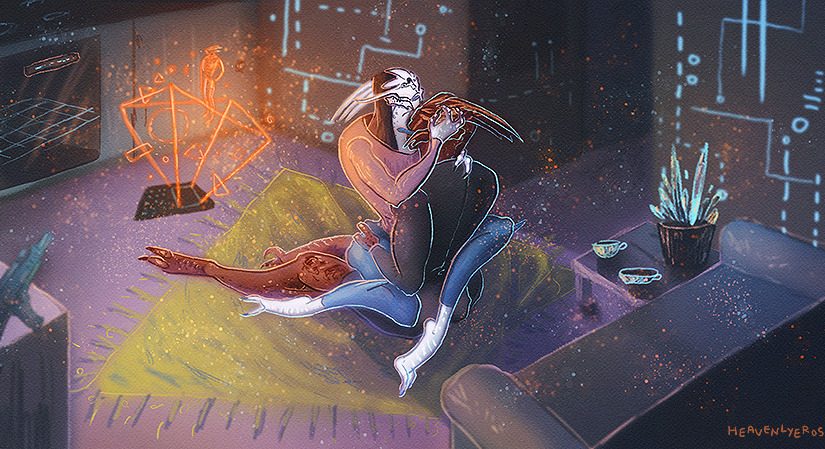 Stepping back into the shrunken Mass Effect fandom, in which the Saren/Nihlus ship has always been a niche that is now kept afloat by literally a handful of unrelenting enthusiasts, I did not expect to find a new friend and creative ally (Sixtus), let alone two!

HeavenlyEros descended among us just as I came back from the summer hiatus and stirred the sleepy turian community into a state of cheerful excitement by showering us with art of unearthly beauty.

END_OF_DOCUMENT_TOKEN_TO_BE_REPLACED

The tale of how Saren and Nihlus first met and became friends.

I am endlessly thankful to Yawning Dragon, Gladius, Kadenex, Misfire Anon and ex-Clusum for reading the manuscript at various stages of completion and providing me with invaluable feedback and insights. Also to Heavenly Eros for taking my crude cover design and making it look gorgeous. To all the devotees of Mass Effect who keep the fandom alive with wonderful art and writing. And finally, to the authors of the series, for creating an amazing world and allowing us to extend it.

The cover is based on Presence by Jesus-Tks.

One day in the third quarter of 2172, Captain Tirren of the STG reported an incident so incredible that he was initially suspected to be making some kind of a joke.

Marked URGENT:GENOPHAGE, the report stated that only hours earlier, a top-secret military research facility located in the largely uninhibited Dio-Oroch nature reserve on Sur’Kesh had been assaulted by a small multi-species team led by a krogan identified as Warlord Okeer. The assailants had arrived in a standard shuttle after disabling the regional anti-aircraft defenses and cutting off all communications to and from the facility by means unknown. In the time it took the STG to notice the facility had gone silent, Okeer and his men had decimated its security forces and murdered all the research staff. Arriving at the scene a minute after the assailants had departed, the STG team that was sent to investigate discovered that Okeer had effectively stolen all the classified research data stored in the facility using a highly sophisticated VI to encrypt the data and all its backup copies with a biometric key.