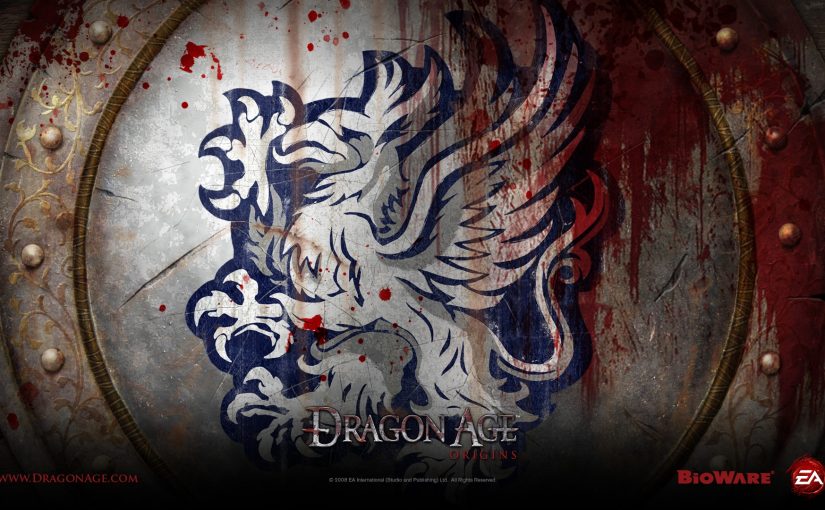 The main reason I would say this is a great game is its focus on storytelling. More than any game in my experience, it goes to great lengths to deliver a strong, tightly written story, simple enough not to deter attention from the important issues, yet seasoned with enough details to make every event believable. It’s a tricky thing, accomplishing this sort of balance in an inherently limited medium of a video game; gameplay issues aside, it’s where Oblivion failed most miserably. To think that these two games tell what’s essentially the same story…! Coming from The Elder Scrolls fandom, I can’t help but compare them, though I can see how this may come across as a kind of offense against DA; DA is everything Oblivion should have been, and so much more.

While the story and setting are not overly original, they work together to form a firm and believable, if not overly awe-inspiring experience. Things make good sense in DA; there have been very, very few moments in the game that triggered my “nonsense” alarm, and they were usually omissions/bugs rather than faults in the story itself. The only issue that wasn’t resolved to my satisfaction was Branka breeding darkspawn; that was too far out there. But in general the narrative flows smoothly from stage to stage, acknowledging the chronology the player chose; the branches you can take the story along join seamlessly into the main plot while still nurturing the sensation that your choices have, actually, made a difference. It’s a very difficult thing to accomplish, and I think DA brings it close to perfection.

I understand that the storytelling isn’t the only aspect a game must do right in order to be good. It’s the one that matters to me the most, however. It’s the story and characters that make me feel the time I spent with the game was worthwhile, more than any gameplay system. In this aspect, I feel DA is superior to most games and – inside the fantasy genre – even to a good number of books and movies. I hope it will raise the expectations of the players and the standards future games will strive to achieve; it’s a hope I all but lost after Oblivion. DA has rekindled my faith in both the genre and the medium.

Now to comment on some things that have been discussed within the fan community.

The Joining: should there be a choice?

Unlike many, I don’t mind that there was no choice; I accept that being a Warden is an essential part of the story. I also acknowledge that the game offers a consistent manner of behavior that enables a player who’s been in truth conscripted against his or her will to show their contempt. There is hardly a conversation about the Order that doesn’t have at least one dialog option along the “This wasn’t my choice” line.

However, I do think that more could have been done to make the player “feel” like being a Warden. Whether through special abilities or special items available only to the Wardens, combat bonuses against darkspawn if the Warden NPC was included in the “active” party, perhaps some taint-related non-combat solutions for darkspawn encounters, and so on. Some of these things could have been done quite easily, I think. The way things are, the player is in no significant way different from any other party member of the same class.

The game is overly combat-oriented. There are no other challenges at all, no other ways to play except to fight. The persuasion/intimidation possibilities are few and far apart and the same goes for the two or three “puzzles” which were a welcome diversion but far from “alternative” solutions for anything. This is by far the most serious flaw the game has, especially because there are so many things that could have been done to improve this situation; small, easy things. Just a minute of thinking brings up a whole spectrum of possibilities: in the Deep Roads, there could have been rooms rigged with mining explosives you could find and, given enough cunning, use to kill everything inside; in the Save the Queen, you could have entered the kitchen and used your poison expert to spike the stew, disabling the lot of the guards walking around; in the Urn Temple, you could have worn a disguise up until meeting the dragons who would smell the intruder; in the Fade you could have had the option to “disbelieve” opponents with high enough willpower; and so on.

Other than this, I must say that the exhaustion everybody seems to have experienced in the Deep Roads is not so much a matter of lousy combat, or even the amounts of combat; the problem with the whole Orzammar quest hub is in pacing. After leaving the city, which is a safe location, you must complete two successive combat assignments (Dust Town and the Deep Roads) with practically no pause at all. The difficulty of the Deep Roads quest was, I think, appropriate and well in context; but another safe location within the Deep Roads, a forgotten settlement or anything with the effect of taking some time to rest and restock, would have improved the experience considerably. The same pacing problem affects the Mage Tower and the associated Fade quest, though this sequence is on the whole shorter and easier so I remember it as much less tiresome.

But in general I enjoyed combat. Using spells and abilities and discovering combinations was a lot more fun than I remember having with Neverwinter Nights, which is based on fairly similar principles. Combat in The Witcher was better for me only on the grounds that it looked better. The only thing wrong with combat in DA is that there’s just too much of it.

It’s not the blood and gore or sex that make DA mature. It’s the courage to focus on nontrivial moral issues. Like one of the main themes of the story: sacrifice. Sure, it’s very brave to give your life so others may live. But is it the right thing to do when you’re king? Is it ok to let a dozen die so that a hundred may live? Is it ok to let a tyrant wield an analogue to a weapon of mass destruction although it would initially serve to save lives? If research can lead to the discoveries that are potentially both wonderful and devastating, should the freedom and thirst for knowledge be quenched or encouraged? Unlike The Witcher, which is appropriately divorced from lecturing on morale and rewards/punishes each choice of “lesser evil” equally, DA is at times as tempting as its demons so that a selfish, ambitious character is likely to have a happy ending, while the idealist will have a funeral. The only exception is the choice to save both Connor and Isolde, which comes without a price, watering down the stern realism created through the other quests.

The appropriateness of those depends heavily on the context. In The Witcher, the boards are more than appropriate because 1) it’s exactly what you’re supposed to do for a living: take on random kill-the-monster requests; and 2) because there’s no implied urgency to the main plot. DA works the urgency heavily, and quite well, for the most part. There is definitely a stronger feeling that there’s a war going on than there was in Oblivion. The quests for the Chanters actually do a lot to strengthen this atmosphere – showing bits of reality of having refugees, broken families, lost units, missing people and cut-off trade routes. So yes, I approve of the Chanter’s quests. The others, not so much. What person in their right mind would go about looking for some magician’s places of power when there’s a civil war and a Blight to take care of?

Quality takes a dive toward the end?

There’s variation, but I don’t think it’s a monotonous dive. The main problem, as I see it, is in Denerim. That was pretty bad, really. After all the carefully thought-out environments and quests, we are given a succession of copy-pasted areas in which multitudes of overpowered bandits wait to give the Gray Wardens a lesson on true dangers of adventuring. Silly billy. No attempts to show how the capital deals with the crisis, nothing specific to be heard, said or done related to the main plot and running issues. Why don’t the nobles you find in the inn have quests for you? How about quests with conflicting goals, so that if you please one, you’ll end up losing the support of another? Why is the Alienage closed? Why is that the necessary ingredient for the Landsmeet, and the others are optional? And so on.

There are little things all over the game, but in Denerim they appear in such a large concentration that they definitely produce a dive. Also, a disappointment. It’s only natural to go there after all else has been done, and just when you expect the best, you are treated to the worst the game has to offer.

Landsmeet makes up for it and then some; but the thing with the Landsmeet is that it’s the dramatic pinnacle of the game after which the actual climax doesn’t feel like a climax at all – more like an extended epilogue. I found the endgame was too easy; I didn’t mind because the rest was always a bit too hard. But I can see how people can be disappointed by darkspawn that suddenly die as soon as you touch them. And the final boss fight was no challenge at all, what after the Broodmother, Branka, Gaxkang and last but not least, Loghain. I was taken by the flow of the story; but I can imagine the feeling of accomplishment suffered in many because that last battle came off as surprisingly easy.

In the end, I didn’t feel let down; I felt the story had an earnest, logical and well deserved ending. I take my hat off to the writers for successfully making the fairytale happy ending and a complete tragedy equally possible and believable. Even with the fluctuations in quality, for me they averaged out into something way above my current level of expectations for RPGs. DA is definitely not above critique, but which game is? I’ll be holding my breath for the sequels, and in the meantime, I expect it will be a bit easier to tease me with other RPGs than it was before; and for that, the authors have my gratitude.

One thought on “Dragon Age: Origins”