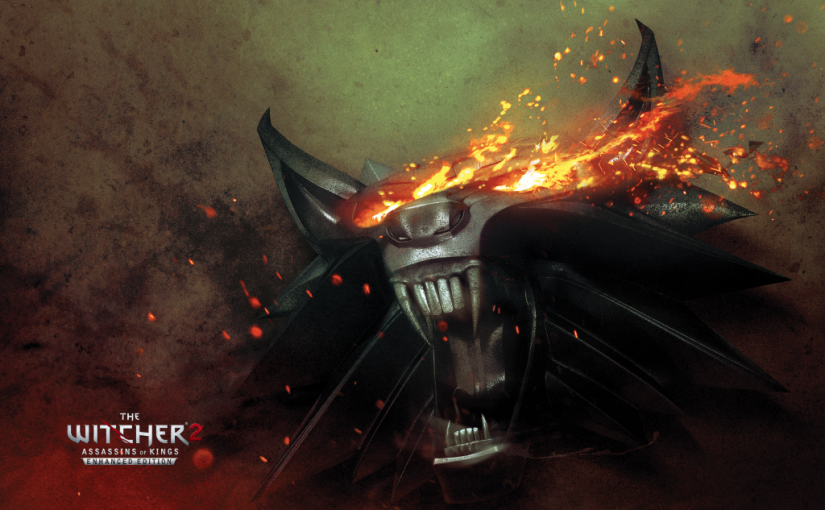 I was thrilled when this game (hereafter TW2) appeared, yet it took me two years to finally play it from start to finish. And even after doing so, I can’t say for sure why it failed to lure me in the way its predecessor (hereafter TW), one of my all time favorites, did in 2008. A mystery by anyone’s standards, because TW2 has it all: the story, the visuals, the combat, the humor. It’s rare that I have so few (next to no) objections to a game. Yet if I was to choose one to replay, I’d still rather go to TW than to TW2.

The best thing about TW2 is certainly its story. Contrary to the omnipresent trends of simplification, melodramatization and catering to the lowest common denominator, TW2 engages the player in a complex, treacherous and ultimately unfair struggle of power – none of which really rests in the player’s hands. In keeping with the spirit of Sapkowski’s books, Geralt the witcher can’t do a damn thing about the roiling political mess that he finds himself hopelessly entangled in – other than survive, and if the player so choses, save the ones he cares about. He can’t save the world, and for a welcome change, nobody expects him to. What’s expected, though, is doing the dirty work for people in power, hiding and trading in their secrets, and, of course, slaughtering monsters.

Like in the TW, the fact that Geralt is a professional monster slayer lays an incredibly believable foundation for the drudgery of combat and fetch-quests that make up most of the gameplay in almost every computer RPG. What could be more natural than asking around for monster-killing work since that’s your primary source of income, crafting and alchemical ingredients, and even knowledge? TW2 goes even farther than TW in this direction, with quests aimed to exterminate overgrown populations of local monsters for good by crafting and setting specialized bombs or traps that you first need to learn about by reading books. What I’d give for a contraption that ends the cursed drowners in the swamps around Vizima from TW! Well, in TW2 you can do that. It doesn’t mean you’ll never see a monster of a given type ever again after you’ve gotten rid of its nests, but at least they won’t jump on you behind every corner. It does wonders for us gamers who’d actually like to have a ‘skip combat’ button.

Not that combat is bad. Most of the things I liked about it in TW are still here – the speed, the perceived virtuosity, eye-candy choreographies. I missed the combos, though. To be fair, of all things I missed a familiar control system the most, but that’s not to blame on the game – I played TW2 using an xbox controller instead of the mouse and keyboard, and I was only half aware of what I’m doing at least half the time. After a very frustrating beginning, I toned the difficulty down to the easiest available, and then it became a challenge to get killed instead of the other way around. Playing the game this way had several important effects that undoubtedly colored my experiences: 1) the entire skill tree seemed to make little sense, and new talents and perks mostly went unnoticed; 2) crafting or otherwise getting better equipment was totally unnecessary (though I did a few rounds of it out of habit anyway); 3) similarly, I only took potions once or twice during the whole game, and mostly used alchemy just so as to sell oils and potions; 4) the boss encounters didn’t even manage to elevate my heart-rate, and some seemed barely interactive.

Because of that, I’ll rather keep my thoughts on the inventory management, the crafting system and even the leveling system, to myself: I can’t claim I really sampled the best (or any) of what TW2 has to offer in these aspects. I did find myself wishing back the minimal inventory from TW, mostly on account of the infuriatingly counterintuitive interface, and the crafting seemed a bit overly detailed given that Geralt himself can’t craft a thing, only gather components, but it wasn’t a big deal. I imagine this comes quite useful on harder difficulties. Doubt I’ll ever be tempted to try, though.

There is, however, a good reason one might want to go back the TW2 for another go: the branching story. At the end of the first chapter, the choice you make will situate the second chapter in one of the two areas, and you’ll only get a superficial glance of the other. It’s a bold move, taking another step in the direction TW has set. I wholeheartedly approve, and the only reason I won’t go back to check the alternative storyline is that I already know everything about it from a friend who played both.

Another important, both content- and end-determining choice occurs near the end of the third chapter, but that one I wasn’t so happy about. The third chapter is somewhat poorly designed in comparison to the first two: it’s much shorter, unstructured, and the atmosphere of pending doom doesn’t support carefree exploration. This is the one serious objection I have for TW2 (in comparison, I had a dozen related to TW). It’s not unfinished the way Dragon Age 2 is unfinished, but it didn’t manage to escape the famous decline of quality over gameplay time all RPGs (except those that are terrible from the beginning, like Skyrim) seem to suffer from.

But the epilogue is epic in an unexpected way. Other than Torment, TW2 is the first game I know of where you can opt out of fighting in the end, and terminate the adventure through civilized discourse. It made for such an enjoyable experience, especially with the wealth of information that’s finally disclosed. Which is another thing I very much approve of. Geralt’s amnesia, while a mere plot device in TW, is resolved almost completely by the end of TW2, leaving me with high hopes for the announced third game of the series.

Oh yes – I may not be into playing TW2 again, but I’m eager for the next game. In the meantime, there are the books, some of which I’ve already read, but not all. So, ahem, stay tuned for reviews. :P

6 thoughts on “The Witcher 2: Assassins of Kings”