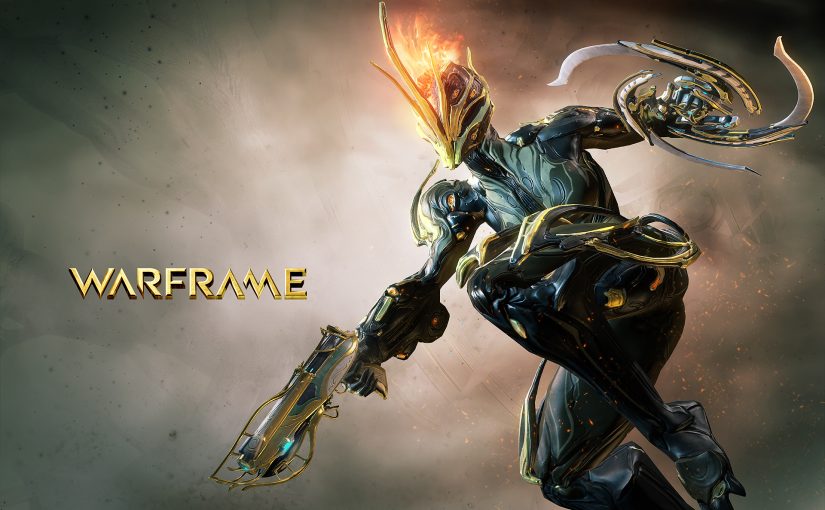 Among the several games I’ve been playing for a while but haven’t yet got to post about, the most recent is Warframe: a free to play, cooperative third-person shooter in a space-opera setting where humans have spread all over the solar system and became divided into three factions which wage constant war on each other. You get to play as one of the factions, the Tenno, who seem to be much more human and much less populous than the other two (the Grineer and the Corpus).  What they lack in numbers, the Tenno make up with the ingenuity of their use of warframes: the powerful, partly humanoid, nearly indestructible war machines that the Tenno operate remotely. The basic gameplay involves doing various missions in teams of up to four players. But there’s much, much more to Warframe than that — and not all of it is good.

At the start of the game, you get to pick one warframe and a set of weapons for it. Everything beyond that, you must build yourself from parts that you typically earn by completing missions. A warframe is analogous to a class in many similar games. Every warframe has a distinct look and feel and a set of four unique powers. But in most cases, different weapons have a much more tangible and direct influence on gameplay than different warframes.  Every warframe, weapon and other gear, are leveled up by playing missions until they are mastered at level 30. Mastery of specific gear contributes to an overall mastery rank, which is analogous to player level. The higher the MR, the more powerful your gear becomes. And of course, some items and missions are locked behind a certain MR requirement.

It is therefore vital for progression to switch gear and level it up. And that’s where the game makes up for its innocently deceptive ‘free to play’ feature: to store new warframes and weapons, you need to buy inventory slots for real-life currency called platinum, which is quite expensive. The platinum required to get enough inventory space for all the available warframes and weapons is roughly equivalent to what one might pay for a brand new AAA title.

Most missions are confined to spacious, but limited levels. The exact layout of the levels is somewhat randomized. This is neither here nor there. The variations aren’t significant enough to alleviate the repetitiveness, but they aren’t a hindrance either. Different tilesets, thematically tied to the home planet of the mission, provide a bit more variation. There are also two large, ‘open world’ areas that initially offer a distinctive experience. But after a certain number of hours spent in the game everything inevitably starts to look the same.

Different mission objectives add more flavor to the gameplay, at least in the beginning. There’s a dozen variants, from the good old kill’em all, to the more strategic capture-the-flag, and the mildly puzzle-oriented spy missions. There are also several types of temporary missions: alerts, invasions, fissures and sorties. These pop up at semi-regular intervals, offering rare rewards and encouraging the player to jump in and do a quickie for some missing crafting material or component of a set at random.

Like many other multiplayer games these days, Warframe depends on the ability to make people play it daily over long periods of time for its survival and sustenance. This is achieved by abusing some well-known psychological traits in more or less blatant ways. After the player gets hooked initially, they are coaxed to come back to the game regularly not so much out of curiosity for its story, its challenges or even social interactions, but by such things as daily login rewards, the temporary missions mentioned above, build-times for warframes and weapons that can take up to three days and so on. Under the hood, it’s all motivated by the need to complete various item collections. Which is achieved by farming.

Farming is a process of obtaining a specific item that has a chance to be awarded for a specific activity by brainlessly repeating the activity as fast as possible and with the minimal possible engagement. For example, a prime warframe consists of four parts. Each part has a chance to drop from a different container, called relic. Relics are themselves a relatively rare chance drop. So to get all parts, you first need to farm a good number of relics that contain them, then farm the missions which allow you to open them. It might take hours of farming to complete a set, depending on luck and teammates. On top of this, the missions where certain relics drop and/or can be opened are high-level, so the quest of collecting a specific set might also include quite a bit of preliminary farming for warframes, weapons and experience that will allow you to play that content to begin with.

And that’s just one example. After an initial period of learning the ropes, pretty much everything one does in this game comes down to farming, and it becomes next to impossible to find teammates (random or otherwise) who are interested in doing anything else. Alternatively, players can buy rare items from other players who have farmed them, for platinum. So not only is farming promoted by in-game considerations; it can also be profitable in the sense of real-life currency. Time is money takes on quite a literal meaning in Warframe — or as I like to call it, Warfarm.

I dislike this intensely. A game designed around farming is not only exploitative and manipulative, it’s also self-degrading. It encourages the players to return to it not because they enjoy playing it, but out of habit or in more extreme cases, because it’s an addiction. It results in mindless repetition that strips away all the meaning, challenge and beauty inherent to actual content. Instead of playing for the visual, auditory, narrative and learning experiences, farmers play it to gather stuff. I’ve heard people say that whatever entrainment value intrinsic to the game is replaced by the pleasure of having completed a collection. Perhaps. But any farmer will tell you that farming itself is anything but fun. It’s a dull, mind-numbing and generally frustrating time-sink.

This is not the first farming game I’ve played and I’ve grown to accept the practice to a certain degree. I’ll replay a brief mission four or five times to get all parts for a new warframe. But it won’t be the only thing I’ll log into the game for. Should it ever come to that, I’ll just quit.

Speaking of visual, auditory, narrative and learning experiences, Warframe is beautiful, easy to get started with, fairly stable, and from the bits of the story I’ve glimpsed so far, nowhere near as bad at storytelling as most modern multiplayer games. Bending the usual rules, it seems to hide its story behind unlocking access to all the levels, which are legion. So I haven’t advanced far along the narrative yet; in fact, it appears I haven’t even started the main story arc, which is strange and refreshing and keeps me interested.

Warframe has decent voice-acting (although the bosses talk a bit too much at times), the AI companion with a multiple personality disorder, Ordis, is surprisingly endearing, and the doggy or kitty pet one can keep on their ship is the cutest thing I’ve encountered in gaming ever. The music and sound effects are unobtrusive, and the visuals are lovely, although they can get overwhelming during missions. Every warframe (and to an understandably lesser degree, every weapon) has a unique artistic identity which nevertheless fits with the visual theme of the entire game. Their models are familiar and alien at just the right proportion, highly intricate and pleasingly organic. Not to mention fully customizable with colors and skins and fashions. Now, that’s something worth my platinum.

Overall, I’m enjoying it despite occasional annoyances. At the pace of about an hour of playing a day, and given all the warframes and their prime variants to unlock, I’ll be playing it for a long while to come.