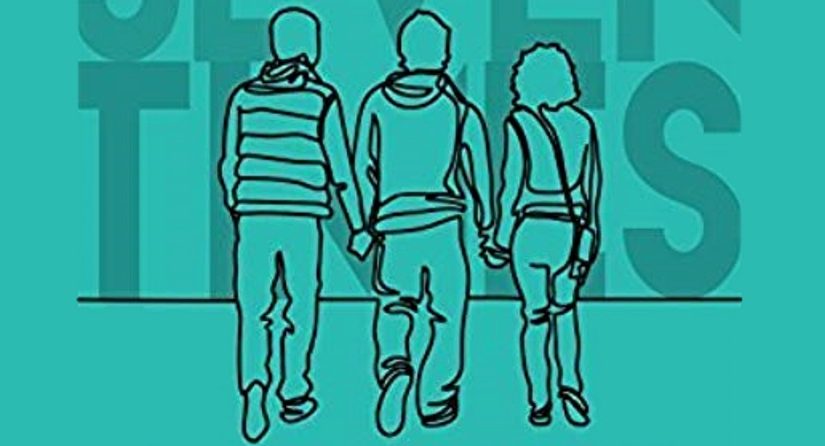 I’m very conflicted about this book. It annoyed me to no end, yet I was interested enough to keep reading it. The main character, Justin, is a gay man who’s been in love with his best friend, Alex, since early adolescence. They’re both grown men now, and Alex has been in a good, stable, open and somewhat kinky relationship with a woman, Jamie, for a while. Alex and Jamie want to include Justin in their sexual relationship and he wants quite desperately to be included in it, but if he simply said, sure! there’d be no story to tell. So instead he stubbornly and stupidly resists it on the grounds that he’s not built for romance, that he’ll screw things up and lose his best friends, that he doesn’t deserve their love and that he has a duty to protect them from himself. And that’s what the book is about.

I’ve seen this trope in other romance novels. After all the external obstacles are conquered (or when there aren’t any, like in this book), one or both (or more) partners more or less suddenly develop one sort of anxiety or another about the budding relationship. Like Justin, they might doubt they deserve to be loved, or that their partner(s) really want them in their lives. Sometimes it turns out the be the biggest hurdle to overcome, other times it’s just a brief detour from the straight road to happy-ever-after. And like the happy-ever-after, it might be a requirement of the genre; an obligatory ingredient that must be present in some form or degree or the novel won’t be considered a proper romance. Something the readers expect and therefore must get.

But, being artificial, this angst will often be the weakest link in an otherwise sound story. A strong, determined character suddenly turns into a self-doubting wimp, or loses faith that the relationship they’ve been fighting for all along can ever really work. I’ve yet to see this properly motivated, derived organically from the characters and their situations. It’s not done because 1) characters who’d succumb to it aren’t people we want to read about; and 2) situations that are bad enough to really cause such doubts don’t generally lead to happy-ever-afters.

Funnily enough, FAIL SEVEN TIMES, as a book dedicated exclusively to exploring and exploiting this trope to its full extent, actually manages to pull it off. In a way. It takes its time and puts in a respectable effort into building a character who might plausibly be like this. I almost “bought” Justin as a believable imagined human. Never quite completely, but close enough. Of course, this came at a price.

I wanted to smash Justin’s face in so many times. And not in the joking way you might wish it upon an irritating loved one. I wanted bad things to happen to him so he’d realize how petty and insignificant his idiotic insecurities are, and so he couldn’t perpetuate his annoying traits by encouraging other people (readers included) to behave similarly. I wanted his friends to die so he’d see how short and precious life is and how stupid it is to turn away the priceless gifts he was being offered. I wanted them to leave him and not fucking admit him back after all the repeated offenses. He said and did things that should not have gone unpunished. I hated that. I hated his friends for taking it and I hated him for being all smug in knowing that they would. None of them are people I’d want to have anything to do with, or read about.

So, why did I keep reading, you wonder. Well… mostly because of the sex. Unorthodoxly, the book opens with a full-disclosure sex scene that predictably falls flat like a flaccid penis. Who the hell wants to read about total strangers having sex? For a sex scene to be hot, readers have to be invested in the characters and/or their situation. But despite the momentary put-off it somehow worked out as a hook; and despite the constant irritation, I did become invested in the characters and the Justin/Alex relationship. I read most of the book waiting for the “real thing” to finally happen. Going though other sex scenes on the way, I realized that the lack of hotness was inherent to all of them, not just the initial one. Some moments in non-sex scenes had that quality, but the explicit stuff was quite procedural and matter-of-fact and didn’t work for me at all. Not even the final one.

On the good side, the writing was flawless. Not mind-blowing, but competent enough to be invisible, with a few sparks of brilliance. And I was quite captivated by the sub-plot about the imagined, long-gone artist Enrico Hazeltine, whose works and philosophy permeate the story and give it a richer cultural background.

All in all — if you’re a fan of the self-doubting, angst-ridden character in romance, this book will be a treat. But if you’re not, better steer clear.