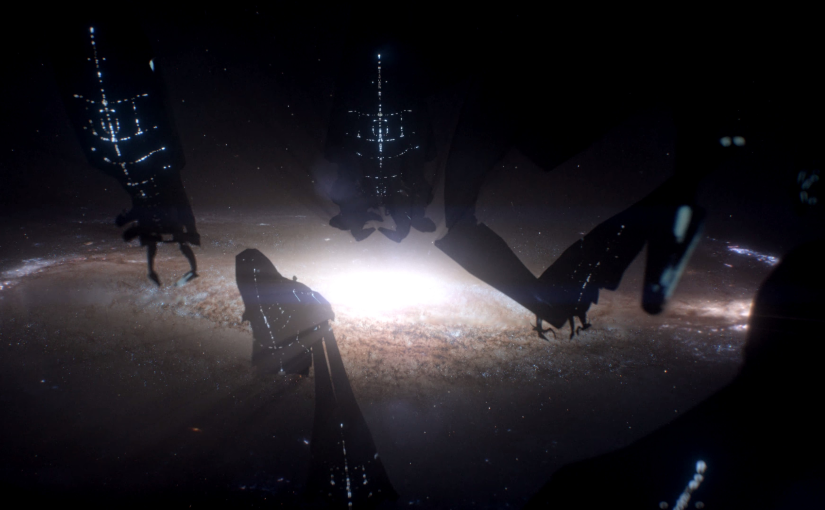 During my many years in the Mass Effect fandom, I’ve seen many fanfiction authors embrace the “No Reapers AU”, where AU stands for Alternate Universe, marking a departure from canon large enough to affect the entire setting. This may be done for a number of different reasons. The author may dislike the notion of the Reapers and the save-the-world narrative framework; they might want to distance themselves from themes such as indoctrination or ignore the existence of factions like Cerberus; from Shepard as the protagonist and their tired hero’s journey; last but definitely not least, this might be the means to keep favorite characters, like Saren and Nihlus, alive past the timeline of the first game. This comes at the price of effectively deleting much of the official content and usually requires supplementing it with much of one’s own world-building.

Needless to say, all sorts of AUs are possible and “No Reapers” is only an example.

Well, lately I’ve been thinking about a “No Humans AU”.

Humans could be easily be deleted from the Mass Effect setting by a global ecological disaster, a nuclear war, or a pandemic of a deadly disease (gigglesnort) that wouldn’t even need to utterly destroy the species: just set them back by, say, a century, so that they would miss the opportunity to discover the Sol Relay before the network is disabled either by the Reapers (in the “Reapers Win AU”, which becomes more likely without the Alliance forces, the Normandy and arguably, Shepard) or by whoever defeats them (as all three canonical endings render the relays at lest temporarily useless).

Without humans, there would be no Relay 314 Incident. Desolas Arterius (and Saren in his entourage) would’ve had no cause to visit Shanxi, and wouldn’t have been tainted with the Reaper artifact at that time. All the events of the comic “Evolution” would be deleted. Temple Palaven would remain standing, Desolas would stay alive, Saren would not be traumatized by the death of his brother nor burdened by the guilt for exacting it. However, since this was the act that presumably marked him as outstandingly suitable to become a Spectre, it’s reasonable to imagine he would not become a Spectre at such a young age, and perhaps, not at all. Of course, it is possible that all these events—finding the Reaper artifact on Shanxi and the consequences—might still happen at a later point in the timeline, regardless of the missing human instigators.

By canon, Saren discovered Sovereign while pursuing evidence that humans were conducting illegal AI research. Without humans, Saren wouldn’t have discovered Sovereign that way. He still might, if he gets tainted by the Shanxi (or some other) Reaper artifact, if we take it that exposure would then drive him to search for an actual Reaper (I don’t remember if this is a canonical fact or a fan theory). It might also happen during some other Spectre business—if he becomes a Spectre (and I rather lean towards Hierarchy military functions under the influence of a living Desolas). I think that discovery by pure chance is too unlikely to be considered. So, to simplify, either he does discover it as a Spectre, or not at all.

If Saren never discovers Sovereign, my own story, Thinker Traitor Soldier Spectre, never happens; and within my own verse, he never meets Nihlus (and then Nihlus never becomes a Spectre). But outside my verse, there’s nothing to indicate a connection between Saren’s service to Sovereign and the meeting of Nihlus, so I will assume this would happen regardless. I also assume that Saren would recommend Nihlus for service as a Spectre regardless of whether he is himself a Spectre, as the recommendation follows rather from Nihlus’s own career record and character traits.

If Saren never discovers Sovereign, Sovereign would surely have another agent, and unless we take it that Saren was somehow special (which I personally find an attractive thought, but there’s little to support it in canon), that other agent would achieve the same things: the alliance with geth, the breeding of krogan and rachni, a base on Virmire and ultimately, the access to the Mu Relay. Since there’s nothing in canon to connect Saren and Benezia outside their involvement with Sovereign, I assume this other agent would also have garnered Benezia’s support. I think it’s also reasonable to assume that it would be some other Spectre, because the freedom a Spectre enjoys, to operate outside the law, is what recommends them most obviously for Sovereign’s needs. For simplicity, I’ll refer to them as The Agent.

Things start to get interesting on Eden Prime. Without humans, there would be no colony there, and no excavations. The prothean beacon would remain buried. Sovereign and The Agent would never have gone there. At the same time, there’d be no joint human-turian investment in the Normandy, and no candidate human Spectre for Nihlus to evaluate.

With no Eden Prime and no murder of Nihlus by a fellow Spectre and a friend witnessed by humans or otherwise, there’d be no Council inquiry on the involvement of The Agent (be that Saren or someone else) with the geth threat. In fact, there’d be no awareness of the geth threat, or of Sovereign’s existence at this point.

Without Shepard’s investigation on the Citadel, Tali would likely die by the hands of The Agent’s agents (doh) and the geth core she salvaged, implicating The Agent and Benezia and mentioning the Reapers for the first time in the Trilogy, would presumably have been destroyed.

Without the geth core to implicate Benezia, there’d be no reason for anyone to go to Therum looking for Liara. I don’t remember what explanation was given in canon for the geth presence there; in my story, Ghost in the Machine, I made up another prothean beacon buried there, explaining both their interest and Liara’s. If we take it that geth were there to stop Shepard from getting to Liara, then there’d be no geth on Therum either, and Liara would, at this time, continue her work blissfully unaware of her mother’s involvement with the Reapers. If, however, geth were there for some other reason, it is likely that without Shepard’s intervention, Liara would die.

If Benezia is not implicated, there’s also no reason for anyone to look into her joint investments with The Agent on Noveria. She would be able to conduct her communication with the Rachni Queen in peace, obtain the location of the Mu Relay, and presumably join The Agent on Virmire or aboard the Sovereign, alive.

Without humans, there’d be no colony on Feros either. Geth, led by Shiala in pursuit of the Thorian, would have plenty of time to find and study it. It seems probable that The Agent would be able to extract the Cipher from it much like Saren manages in Ghost.

Having the Cipher, the location of the Mu Relay, Benezia and her indoctrinated Commandos, and without anyone aware of their plot, much less chasing them around, The Agent is in an excellent position to pull off what canon Saren couldn’t—the immediate return of the Reapers in force through the Citadel Relay.

Without Shepard, or someone else in pursuit, no one would discover Vigil on Ilos and learn what the Reapers really are, or what fate had befallen protheans, at this time. Assuming The Agent carries the Cipher (and not Shepard or someone else acting against the interests of the Reapers), no one would be able to communicate with the Thessian beacon and meet the other prothean AI, Vendetta. The Mars Archives, where the blueprints for the Crucible were discovered just in time to build the device before the utter defeat of the Council forces, would be unknown and out of reach. It is therefore unlikely that, in the absence of humans, the Crucible could be built, and that any of the canonical victories over the Reapers would be possible.

On the bright side, if Reapers evaluate the ripeness of spacefaring civilizations for reaping based on whether or not they have managed to enable the nearest mass relay, humans might conceivably survive the mass extinction of this cycle and carry their considerable technological progress to the next one. They would eventually discover the relay, go through it, and either find the Reapers still engaged in the clean-up (if only a few hundred years late compared to the canon), or be the first civilization in this +1 cycle to find the Citadel, abandoned and sterilized, and claim it. This would give them a huge edge over all other emerging civilizations (assuming they’re the only such case), and probably qualify them to become the ultimate rulers of the Galaxy, like the protheans in the -1 cycle. The knowledge buried in the Mars archives might be used after all, to build the Crucible and win over the Reapers when the time comes. But this also depends on whether the Reapers are on an immutable schedule, or able to return before the 50,000 years elapse should they detect a civilization advanced enough to, perhaps, one day, even take the fight to them.

The inevitable conclusion, that humans are vital for the canon victory over the Reapers and that Shepard, or whoever dons the mantle of the first human Spectre, is an extremely annoying antagonist for The Agent and Sovereign, is, of course, nothing new. But it was a fun thought experiment. I’m of the opinion that the narrative of almost every mainstream quest game, be it a sci-fi shooter or a medieval fantasy RPG, would improve in leaps and bounds just by removing every trace of the notion of “the chosen one”. It always bugged me that Mass Effect had not only one, but two instances of this incredibly clichéd trope: Shepard, and humanity. Humanity even more than Shepard. It is reason enough for me to want them deleted from my favorite setting. Another reason is that I believe the setting, and the game worlds, would be so much more interesting to explore from a non-human point of view. Last but not least, in my own Mass Effect stories and daydreams, humanity and Shepard truly are the antagonists, and in solidarity with my own favorite characters, I’d prefer to see them marginalized or entirely removed.

All that said, this has been just a fun thought experiment. I have no plans or intentions of writing anything in a No Humans AU. But if someone else does, or already has (in which case, I apologize for being oblivious to it), I’d be interested to see the results.