While excavating the drawers of my former desk, I came across a bunch of development sketches for Thinker Traitor Soldier Spectre (TTSS), my Mass Effect novel from 2019. It’s mostly maps and scenography plans.

Here’s an evolution of the overall itinerary:

END_OF_DOCUMENT_TOKEN_TO_BE_REPLACED

This is a very old version of chapter 1 of Thinker Traitor Soldier Spectre, the Mass Effect fanfiction novel I finished in 2019, posted here as part of An Exercise in Self-Critique 4. Compare it to the official final version here.

A bright morning in Har Triste on Palaven. He’s standing on the edge of a crater, ankle-deep in the rubble. Where the Subourus Plaza used to be. The buildings around still stand. At angles. Burnt and punctured, shattered windows and naked armature. He can’t remember which war he’s fighting in, but war it is. His planet is under attack, his people suffering. Yet as he looks up at two winding missile tails in the serene yellow sky, he only thinks, it’s beautiful.

END_OF_DOCUMENT_TOKEN_TO_BE_REPLACED 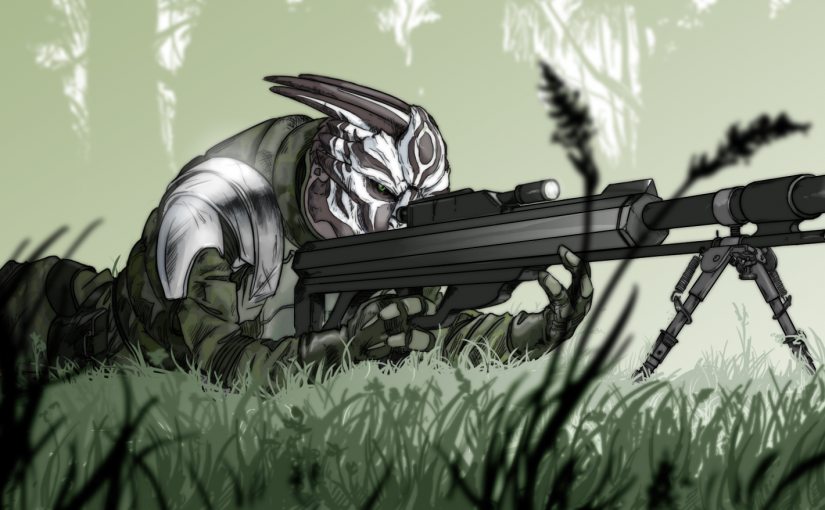 My friend Sixtus drew this amazing, badass Nihlus sniping in the jungles of Invictus as an illustration for my Mass Effect novel Thinker Traitor Soldier Spectre. (Please view the picture in full size here!) This is incredibly inspiring and uplifting. I could not be happier and more grateful for all the support this story has lately got from my friends and other readers alike. ♥

My friend, HeavenlyEros, made this fabulous poster for TTSS! Eros also helped me create the cover for it, and performed many other feats of great art and friendship, some of which I mentioned before. The Mass Effect fandom is truly blessed to inspire such talented, devoted and kind creators — and so am I, to have such friends. ♥

END_OF_DOCUMENT_TOKEN_TO_BE_REPLACED

Nihlus took a long shower. Real long. Half an hour, or more. It didn’t matter, while they were docked, Saren had said. They’d be leaving soon, though. They’d talk about the details later, he said. He mentioned the name of the place but Nihlus had forgotten it within five seconds. His mind was all jumbled up. He couldn’t recall that tune that had been on constant replay in his head for days, and he struggled to keep track of the damnedest things. Like whether he’d already washed under his crest or not. He looked at the soap dispenser, and—

Eventually, Saren had peeled him off and sat him down on the only chair in the room. The shakes were pretty bad, but he didn’t care. He had questions, so many questions! Only, all his language had slipped away. So he just sat there, gaping around at… his new home.