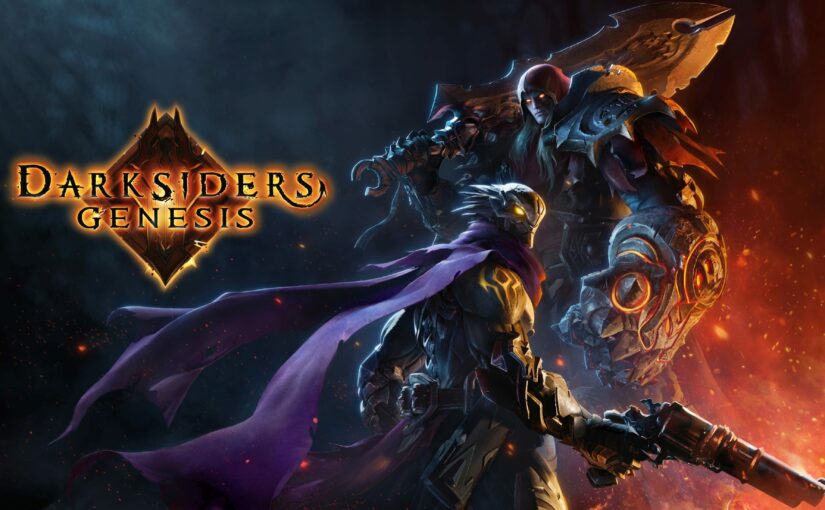 I am here today to divulge, in gratuitous detail, my unexpected obsession with Darksiders. Although I’ve known of this franchise a long while, and even sought out soundtracks and the like in the past, it has only been now, with Darksiders Genesis, that I found myself attracted to the setting and the characters, thanks to the amazing bromance between the protagonists, War and Strife, who can be played together in coop multiplayer.

I started to play Genesis with a friend over Steam remote splitscreen, which, I regret to say, took away much from the initial experience. I found the game largely frustrating because of the strange camera angles, unresponsive commands and the tiny, blurry display where it was often hard to see my character and mostly impossible to tell which way he’s turned. I grumbled a lot and if my friend didn’t poke me to continue after week-long breaks following half-an-hour sessions, I think I would’ve dropped it and missed out big-time. But even in this period, I found two qualities in the game that stood out quite sharply: the awesome soundtrack, and the shockingly good writing.

My appreciation of the latter surfaced gradually, as I admired, more than a few times, the consistency of the characters and their distinctive voices. Much of this comes from the excellent voice acting, but at least a part of it is in their words. And then, little by little, as I realized that the game wasn’t just about their mission, but about their evolving relationship, my interest deepened.

War and Strife start out as borderline hostile to one another. War is blindly devoted to the Council they both serve and cares for nothing but his duty and their mission, while Strife is conflicted, alienated and unaffiliated. They work together well enough but on a personal level they seem reserved if not outright antagonistic. Half-way through the game, I realized that I recognize this dynamic. It’s a Saren/Nihlus dynamic. War is the serious, grumbling, old-fashioned, duty-bound Saren-like (he is also one-handed: the great gauntlet on his left arm is a monstrous prosthesis), and Strife is the humorous, superficial, modern Nihlus-like. They are both equally deadly, but there seems to be a slight power imbalance favoring War, even though I later learned that he is the younger of the two.

The quality of their banter never faltered, and even early on there were signs of a developing relationship. But then, not long after that half-way point of recognition, a crucial event in the game acted as the catalyst for the budding bromance—and for the quality of my interest as well. In it, the Horsemen are forced to revisit the sacked Eden, where the rest of their Nephelim kin still lay on the fields of battle, slain by their own hands. There they defeat the fallen angel Astarte in the most epic fight of the game, set with an astounding soundtrack and featuring the only instance of horseback combat against a boss. After the battle, Astarte taunts the Horsemen by reminding them of their treachery, and hints at evils from Strife’s distant past. Although she might have valuable information, War executes her—ostensibly to prevent her from further hurting Strife’s feelings and intruding on his privacy. It is a momentous scene.

After this, for two chapters, the Horsemen search the ruins of Eden, making peace with their past. Strife admits to having been a sadistic killer even before he became a Horseman, and War encourages him to leave those memories behind and strive to become better. Their dialog assumes a new, highly intimate character. Though they started as brothers in arms, it is here that they become friends.

I’ve never seen a more beautiful bromance in a game. I don’t think even Bioware games can compete with it. In Bioware games, there’s always so much else going on: other companions, other love interests, different subplots and allegiances and so forth. There’s no one else in Genesis to take the spotlight from War and Strife. More importantly, they can trust no one but each other, expect help and understanding from no one else. They have no other friends, apart from the other two Horsemen, who are far out of reach. And when this circumstance, which seems forced on them in the beginning, results in intimacy and friendship, it’s cathartic.

It was after the Astarte encounter that I started drafting a tentative story where the bromance would also be a romance (because, of course I’d write that; what else?). Then, in a fit of inspiration, I bought the damn game, all with the artbook and the soundtrack (which I’m listening to right now). And the next time I played, I had my own big screen, could see the characters clearly, could move and fight with a lot more ease and found the whole experience exalting.

But much more than the gameplay stuff, I was delighted by how the bromance continued to develop. I made my poor friend wipe on one of the boss fights multiple times just so I could hear Strife say to War: “God. I love it when you get like this!” over and over again. Many examples of tongue-in-cheek innuendo followed during the final chapters. While I’m not deluded enough to suggest that the authors shipped these characters too, I’d be willing to bet they knew players would ship them, and wrote Strife’s flirting into the game with open eyes. After reviewing cutscenes from the other three games, I developed a suspicion that Strife will eventually come out as gay (though sadly, probably not gay for War, as I would have him). I also developed a suspicion that he might die, and if that is so, than I prefer he isn’t gay. But being an optimist, I hope for the happy-ever-after version in which everyone lives to enjoy a well-deserved retirement.

Thing is, as I started digging deeper into the franchise (I acquired and studied all the comics, read the book, I’m currently playing the first game of the series and have watched most of the other two as cutscene movies), I discovered that the Horsemen keep getting fucked over by everything and everyone, including even the other Horsemen. They are tossed around by greater powers like dice in some cosmic game. A common trend in the narratives of all the games so far is that, upon completing their nominal mission, they learn they have been manipulated into ultimately working against their initial goals. And so their guilt piles, but hopefully their anger too. In Darksiders 3, Fury is shown to be able to finally break free of the Council’s control (though the plot that resulted in this is sadly quite flimsy).

Genesis seems to have been planned to be Darksiders 4, with the fourth Horseman, Strife, as the protagonist (the first three featured War, Death and Fury, in that order). But that plan obviously changed in favor of making a prequel so distant in time from the events of the other games to effectively be more of a spinoff than a part of the series. It is set at a time immediately following the Nephilim extinction, in which the Horsemen played a crucial role, and reflects on this through Strife’s unresolved guilt and War’s wavering faith. While it would be unfair to say that other games haven’t touched on this subject, so fertile in terms of character development, they have failed in another department—the one whose job was to tickle my curiosity and make me care—so I have no memories of ever giving it much thought before.

But here I am now, thinking of very little else.

A belated disclaimer: parts of this post were written as long as a month and more ago; some, a few weeks ago; and only the last few bits, mere days ago. I have been too busy writing the aforementioned “tentative story” to give this proper attention. Need I say that my sentiments about Genesis, War and Strife haven’t changed? What has changed, is that it looks like I’ve managed to coax at least one other friend into this wormhole serpent hole. It has been, and continues to be, a wondrous experience.

I’ve not made a new fanworks category for this blog since its inception in the 2010s. I suppose it’s a one-in-a-decade kind of an event! Who could’ve guessed that Darksiders, of all things, would be it?

3 thoughts on “Darksiders, my new obsession”