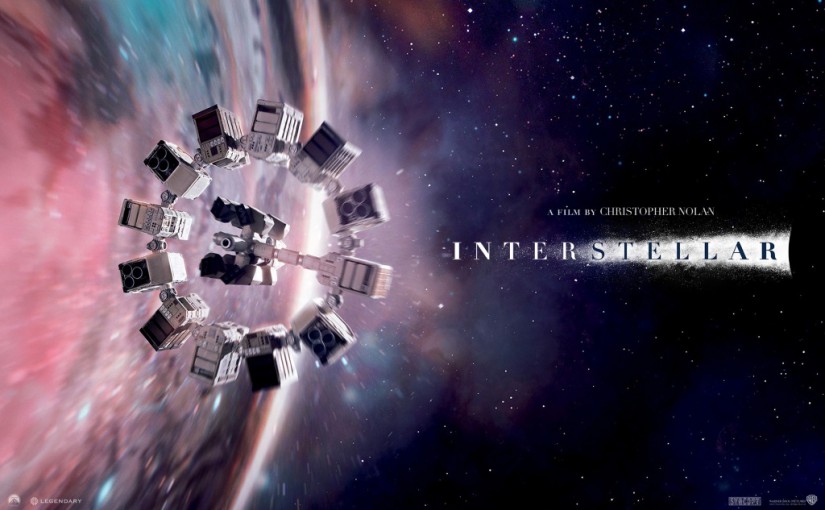 How long has it been since I last saw a sci-fi movie with more sci than fi that I actually liked? I can think of a few I didn’t like, namely Gravity (2013) and Sunshine (2007), but the closest thing to fit the above description would have to be Contact (1997). So it was about time something like Interstellar finally happened. In a word, it’s awesome. Everything, from the unforgiving plot and intelligent characters, over the stunning visuals and a magnificent soundtrack, to the scientific background, exceeded my expectations. I have seen it twice and enjoyed it to bits both times. 10 out 10, would definitely watch again.

In a future removed from the world that we know and share by an unspecified number of years, the Earth is slowly turning into an uninhabitable place due to the evolution of the Blight, an unstoppable pest that decimates any and all crops, and thus also humans. At the moment when the plot of Interstellar starts to unfold, the human race is already doomed to be extinct in a matter of a few generations. So the plot centers, not very unpredictably, around finding a new home for the human race by the means of interstellar travel.

I won’t even try writing a synopsis. The plot is anything but simple: it is constantly tugged to and fro by a multitude of opposing influences, from character motivations which aren’t always obvious, but on reflection make solid sense, to the vagaries of relativistic time dilation in the vicinity of a massive black hole, to the artistic license of the authors, who cleverly use some of the known limitations of science to smuggle a bit of space magic into the mix.

The science of Interstellar has the unfortunate trait of being almost entirely in my own field of interest, so I couldn’t help noticing the inevitable… problems. I know where they’re coming from, it’s quite obvious and benign: the authors wanted a black hole, but a black hole with nothing around that could emit visible radiation would be just — black, which is no fun at all; so there had to be an accretion disk, and for that there has to be a companion. So far so good. But the authors also wanted habitable worlds — right next to the black hole, as in, scraping the horizon — in a black hole + neutron star binary. Ok, so it turned out the worlds weren’t exactly habitable, but the undeniably much less entertaining truth is that such worlds would be entirely impossible. Now, huge as this issue may be for someone like me, I realize it’s still completely negligible for the vast majority of viewers. Other than that, I noticed only a few minor things, and rolled my eyes at technobabble just twice (tidal gravity and quantum data, anyone?). Which is, contrary to how critical all this may sound — pretty damn amazing. Add to this the romantic story (in this research paper) of how the effort to render the black hole visuals in the most realistic and scientifically correct way Hollywood money can buy lead to some genuine advances in the field of quantum gravity, and what you get is an exceptional work of both art and research.

One thing that I found pleasantly surprising, yet most people might find not pleasant at all, is the moderate, patient pace of the movie. There’s a stark contrast between the constant race with time, the critical importance of every minute and second, and the careful pacing of the story which never seems to hurry, the way so many movies do, to come to its conclusion. Perhaps this was inspired by or even meant as a nod to the Odyssey, or maybe it was the result of an attempt to awaken the awareness in the viewer of the vastness, silence and ultimate emptiness of space. In either case, I have been warned by others who’d seen Interstellar before me that the movie is “kind of slow” and “dragged out”. While I can definitely see how it could be described as such by, say, a mother taking three small children to the movies and struggling to keep them calm after three hours of non-cartoon content, for me those three hours flew much faster than, say, any of the action-filled, tightly-packed Hobbits.

This is also reflected in the soundtrack — which I would have mentioned anyway because it’s a real treat for the ears, with the waves of meditative calm, reminiscent of the cold shine of bright distant stars, replaced by heart-racing urgency of survival instinct so characteristic for human experience, replaced again by calm in sync with the rising and falling of the plot. Textbook perfect.

All in all, Interstellar is beautiful to see and hear and challenging to contemplate. Highly recommended.