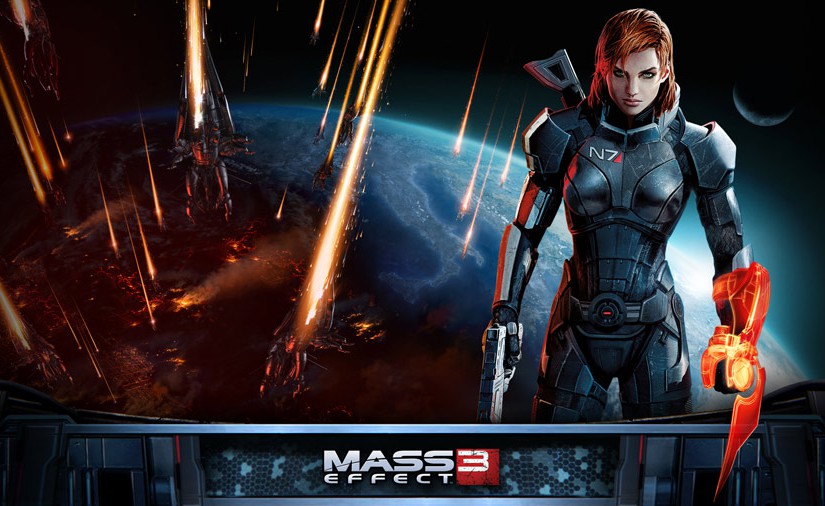 This is not a review. In fact, I don’t know if I’ll ever have the stamina to write one; you know, with objective criticism and all that. That would be exceedingly difficult, because, see, this game pulled on all my strings so hard. Other than some minor annoyances, I’d say that everything was done exactly right. Or, to allow for some weaseling, everything was done exactly to my taste.

I finished after five days and thirty hours of maniacal playing. Every minute was a pleasure. All of it, from shooting and talking to music and atmosphere, was simply fabulous. ME 1 planted the seeds, so to speak, but it’s not a game I’d ever be tempted to play again; ME 2 was an immense improvement, and in some aspects, already near what I’d call perfect; and now ME 3 has addressed those few remaining impurities, putting it all together: a strong, heroic narrative with irresistible, addictive gameplay.

In ME 3, the war is everywhere. Every word you say, every action you take, is devoted to winning, or rather, surviving. Every event you’re drawn into, every level, every place you visit is marked. There are no safe havens, and the moments when you’re allowed to forget about the reality of millions of people dying and hundreds of lovely worlds being destroyed are as rare and far apart as you’d expect with that kind of threat, that kind of responsibility on your shoulders. Of all the games dealing with the end-of-the-world scenario, this is the first one dealing with it properly on all the scales. The sense of urgency, flavored with a tinge of despair and a pinch of foreboding, permeates everything. Even your dreams.

Two things I’d praise the most are: the level design, and the interaction with the crew.

The levels are fantastic. I played on “normal” or “role-playing” difficulty and the action was challenging enough to keep me primed, while rarely being difficult enough to get me frustrated. Always in motion, always something happening. Almost every mission had something new to offer, some quirk of the environment, some unique set of circumstances to use or fight against. There wasn’t a single moment when I thought, oh god, not another action sequence – like I felt most of the time in, say, Dragon Age or even in ME 1. No. This was just so much fun all the way and I wouldn’t mind replaying a single level.

On the other side, the talking side, the crew and passengers of the Normandy have evolved a great deal since ME 2. I can see the devs took a hint from the that other Bioware team, working on Dragon Age. This time around, there are no “calibrations.” The crew members always have something relevant to say, about the last mission or the war efforts in general, and you can find them talking to each other and moving about the ship and the one safe zone – the Citadel – busy doing things that make sense for their characters. I’d say this is one of the greatest improvements that ME 3 brought about.

Now, the two things I’d change if I had a magic wand are: the role of Cerberus and the role of multiplayer.

Cerberus simply doesn’t deserve all the attention it gets and their influence and capabilities are fantastic beyond the reach of suspended disbelief. At moments it seemed like they were the “real” enemy, while the reaper invasion was just a convenient background for their machinations. Just doesn’t compute. I’d scale them down to about a third of what they represent, and even then, I’d probably be rolling my eyes. How the hell can Kai fucking Lang be difficult to kill after taking down entire reapers?

See, I still don’t really know what happened in the end. Who lived, and who died? Like in Battlestar Galactica, ME 3 dissolved into a sort of semi-poetic pseudo-mysticism near the end. Which I don’t mind per se; but a slide-show summary of what happened after  would have been much appreciated.

I’ll be playing again, though. Perhaps after another playthrough or three, I’ll gather the courage to try a serious analysis. Till then, warmest recommendations.

Meanwhile, I found out that you can have the “good” ending (though its goodness is debatable) even without playing the multiplayer. The availability of different outcomes depends only on the “Effective Military Strength” and apparently it can be maximized even without increasing the multiplayer-multiplier (hah).

I apologize for spreading misconceptions.