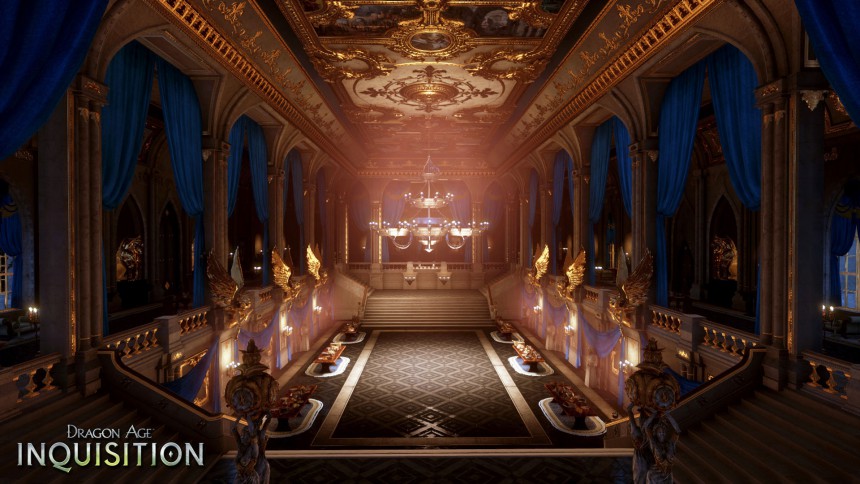 I got this game in preoder, but haven’t finished it yet; I started and quit the single player campaign twice (for reasons that are out of scope of this post), and mostly just played the multiplayer. But I feel compelled to speak about something I studied in detail nevertheless: its music. What follows is a somewhat extensive, but by no means exhaustive review; the entire soundtrack (without DLC) has some 40 tracks, all of them excellent to varying degrees, but these are the ones I come back to over and over again:

The first time I ran the game and heard the Main Theme I was immediately struck by its semblance to a tune from another soundtrack I’m intimately familiar with: that for the Lord of the Rings movies. Namely, the first few notes which make the most prominent and central motif of the whole track, are, well, completely identical to the beginning of Pipin’s song in The Steward of Gondor:

And it’s not just the first few tones either, is it? It’s the repetition too, and the somber mood throughout the exposition. It’s unfortunate. I can’t shake that first impression to this day, even though The Steward of Gondor couldn’t even dream of competing with the Main Theme for the number of times I heard it. It’s all the more sad because on a rational level I know that the Main Theme actually draws from the title track of Dragon Age: Origins, yet I have to invest a lot of effort to recognize it, let alone follow it through:

Despite the inevitable conclusion that the Main Theme is largely derivative, it has its qualities. After the slow, dignified intro, comes a rush of energy and motion that quite literally embodies the promise of the epic struggle that follows when you click new game in the main menu. It can be heard many times later in other tracks as a symbol of taking a stand and ultimately, standing victorious.

The Wrath of Heaven

My favorite. Nothing derivative about this one, oh no. It’s dark and mysterious, tempting and dangerous, like some magical yet monstrous beast in uneasy slumber… and then it awakens. This is a combat track, and it can be heard during many encounters in the game’s introductory chapter, but unlike a vast majority of combat music in general, it maintains harmony and clear structure throughout. The unrelenting pace of the strings in the background keeps the tension high, and the seemingly random, high-pitched and drawn-out intrusions by whatever exotic instrument that was ingeniously used in this and other tracks continuously remind us of the otherworldly, nightmarish nature of the threat at hand.

Another favorite. This one has a special place in my heart because, starting from around 02:20, it’s what you hear in the menus and lobbies of the multiplayer. Is that a cello soloing in front of the orchestra? I can’t tell, it sounds more exotic than that, but perhaps it’s the performance and not the instrument. The melody seems simple, but it’s hard to reproduce, it seems to be varying from one instance to another; could be variations done by the composer, or improvisations by the performer. In any case, it’s hypnotizing, all the more so because it carries the same air of mystery and dormant threat from The Wrath of Heaven. There’s a change of pace around 03:00, where another theme enters the stage and the track develops, gains weight and depth, but its internal conflicts remain unresolved, and are brought to climax only later, in–

This track picks up where In Hushed Whispers left off, and in the game, it is the background for the final encounter in the quest with the same name. It also features in the multiplayer as combat music in the final fight in the 5th zone. If you pay attention, you can notice a brief nod (between 00:20 and 00:25) at The Elder One Theme that only plays out later on the soundtrack and in the game itself. Hadn’t noticed it myself till just now. Very neat.

And now for something a bit different.

I haven’t yet reached the point in the game where this track (and several others that carry the same themes) play out so I lack relevant associations. But I like the music for itself. It reminds me of distant, vast and perhaps deserted lands, a long and lonely march, a sunset over an alien horizon and a longing for home.

Adamant Fortress, the combat version of The Western Approach, brings in the motifs from In Hushed Whispers as well as from the Main Theme for quite a rich and varied piece.

And yet another favorite. (If by now you’re thinking that most, if not all the tracks featured here are my favorites — golly, you’re right!)

Wicked Eyes & Wicked Hearts is the dramatic, perhaps even the combat variation of the Orlais theme(s), which I don’t like one bit in other instances, but this track is just plain fabulous. It tells a story of its own: of masks and schemes, luxury and depravity, evil hiding in plain sight and revelations in the night. See how it inspires me to go all poetic?

This is the piece that got my attention in the multiplayer, since it features prominently as the background for the Orlesian Castle tileset. Isn’t it odd that I can’t tell, even after more than 300 hours of it, whether it’s played out in parts or whole, and whether it’s exploration or also combat music? I am also half-convinced that there’s music with this theme in the multiplayer that’s not found on the soundtrack. Could never be bothered to investigate it, however, so it shall remain a mystery for now.

This one is strange and interesting. Again, I haven’t heard it in the game yet, but I recognize the themes it’s weaved from. There’s The Elder One Theme, and a bit of Wicked Eyes & Wicked Hearts, a touch of The Wrath of Heaven and a pinch of In Hushed Whispers. I dare say it doesn’t have anything of its own, really, but it’s irresistible anyway, what with those restless strings and mysterious transients keeping up the suspense.

The Elder One Theme

The theme of the antagonist, The Elder One Theme has it all: the ambition, the power, the intelligence, the agency. It is incredibly strong and elegant in its simplicity, while still maintaining that mysterious, nightmarish vibe that’s present to some extent in every track I like.

Definitely another favorite — but I wouldn’t be me if I didn’t find something to complain about, and in this case it’s the weirdly… cheap sequence from 02:45 to 03:20. It’s like some amateur musician, no doubt an avid fan, crept into the studio after the mix was finalized, and inserted a bit of his own creation at some random place, to make his mark on the game he loves. I can’t imagine what possessed the authors to leave it on the soundtrack; it might go unnoticed in the game itself, in all likelihood it accompanies some very dramatic and emotional moment when the music is about the last thing the player pays attention to. But here it sticks out like a broken thumb. It’s a shame, without it this track would be damn near perfect.

The rest of the soundtrack consists of combat music, Orlais music, and dramatic music.

Combat music is almost never intended or pleasant to listen to outside the game, and other than the few exceptions mentioned already, this soundtrack is no different in that sense.

Orlais-themed tracks I dislike because they’re too… happy, fluffy and tra-la-la, so blunt and obvious in the attempt to create a decadent atmosphere that they’re almost comic, and of that I don’t approve.

Finally, by ‘dramatic music’ I mean tracks that derive from the themes above, but mix too many different motifs together or string them up one after another in ways that make sense for a soundtrack, but not for strand-alone pieces. They are often audibly ‘dramatized’ to better underline whatever’s going on in the corresponding scenes, and tell incomplete, context-dependent stories. Nothing against any of it, just not something I’d come back to.

In this category I’d also put the “Tavern Songs” – a free addition to the soundtrack that was released in answer to the pleas of the fandom. These tracks, which I believe are meant to be ‘atmospheric’ mostly just add rather crude lyrics to already familiar themes, and recast them with simpler instrumental setups that are supposedly performable in taverns. I found nothing worth mention there.

To sum up, Dragon Age: Inquisition has an amazingly well produced soundtrack, leagues ahead of the previous two games, with all the makings of the perfect background for an epic adventure, and more. It is at once familiar and alien, seductive and threatening, thoughtful and violent — and it never bores. Even though I don’t like all tracks, I do like almost all themes. And those tracks I do like, I keep coming back to again and again, each time to discover something new and delightful.

2 thoughts on “The Music of Dragon Age: Inquisition”