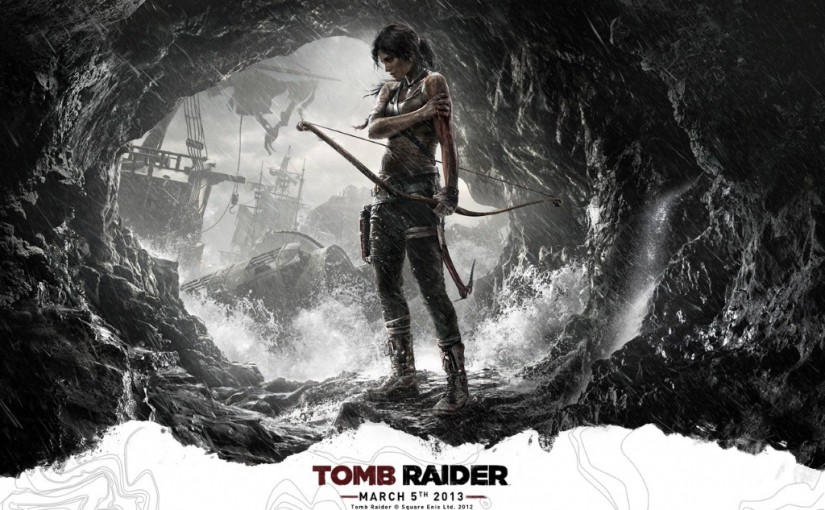 When I started playing this game, I went into it with practically no expectations. Perhaps that is why I finished it with practically no objections. In its twenty-something hours, I had nothing but fun taking twenty-something Lara Croft through her first adventure. The visuals are stunning, the environments detailed and evocative, the difficulty of various challenges seemingly tailored to my taste. And then there’s the addition of skills to develop and tools to find, craft or improve, and for the first time, a sense of character to accompany Lara’s fancy moves. What’s not to like?

Well, of course I can think of a few things. If you’re in for a meaningful, non-linear story with choices and consequences, a cast of strong, original characters, a rich level-up system that will make you replay the game thrice with different specializations, or puzzles of stupefying complexity that you’ll toil over for hours – you’re definitely going to be disappointed.

There’s also the question of just how much this is a TR game. Note that I’m not exactly a fan of the franchise; I have played the remake of the original a couple years back, and the original game itself a couple decades back (gulp). I tried some of the sequels, but none left a lasting impression. And I have seen a movie, but my memories of it consist of random images of Angelina Jolie. So I can’t claim I have a firm grip on what a TR game is supposed to be like. The first things to come to mind are frustrating positional (how-the-hell-do-I-get-up-there) puzzles and overpowered end-game enemies, balanced out by pretty graphics (check), interesting levels (check), and the inscrutable pleasure of making Lara engage in insane acrobatics (check). Gameplay-wise, this one is a lot more… streamlined, I suppose. (For me that’s neither a good thing nor a bad thing, just a thing.) There’s more of a sense of purpose and less time is needed to figure out what you’re supposed to next. It’s carefully directed and much of the content is delivered through cut-scenes and quick-time events so as to produce an interactive cinematic experience. I realize that’s not to everyone’s taste. But it worked just fine for me.

The story is a straightforward mix of soft sci-fi and survival suspense. And when I say straightforward, I really mean it… there’s not a single plot-twist, or anything even slightly unpredictable to it. That’s not to say it’s bad. It’s unremarkable, but it stands up to scrutiny at least as well as any other TR story, and perhaps even better because it’s motivated by themes of survival and loyalty rather than dry curiosity.

Lara’s more human than in any other incarnation that I can remember, thanks to the more-than-decent voice acting, the visible and lasting evidence of exhaustion, exposure and injuries that don’t just spoil her good looks but on a couple of occasions require action (hunting for food, looking for shelter and medical supplies), the character animations that communicate quite clearly and vividly that she’s going through hell. Her toughness and confidence are tempered with fear, doubt, guilt, and unwavering devotion to people who she considers friends.

Those would be the other survivors. I wish I could say they make a cast of interesting characters, but in truth they’re no more than walking, talking stereotypes without as much as a hint of any unique traits. I could tell from the first cut-scene who was going to be the damsel in distress, who the grumpy but reliable soldier, who was going to betray, and who was going to die. They actually fit the shallowness of the plot: unremarkable enough not to draw attention from the action.

I mostly enjoyed the action, especially the traversal of complicated levels and solving the positional puzzles. Most of these are confined to ‘tombs’ that you ‘raid’, being the tomb raider, for rewards in form of salvage (that’s the resource needed for upgrading weapons) and revealing secret locations. These tombs are nothing like the tombs from other TR games, though. They typically consist of a not-really-challenging approach, a chamber with the puzzle, and another chamber with the reward – and that’s it. The puzzles are decent; some were almost frustrating, but again, nothing on the level of wtf that I remember from the other titles in the franchise.

The combat is another story. I enjoyed that too for the most part, but not as much as the running around. Whenever I could, I tried to use stealth and off enemies from afar without really engaging them. They have clever ways to drive you out of cover and are deadly, even at the easiest level of difficulty, when they get you in the open or close in on you. I never quite mastered the melee and dodge mechanics (partly because the left shift key on my keyboard is shamefully small and I kept missing it, and partly because the ME MP spoiled me with its press-space-to-do-anything so I kept jumping when dodge was more appropriate); after the first appearance of the Oni, just past the half mark, I turned down the difficulty from ‘normal’ to ‘easy’ because I suspected I’d have to fight a lot of those in close quarters. I was wrong, but I kept playing on ‘easy’ because it made the fights shorter.

One thing that surprised me pleasantly was the banter between the enemies. I’d swear this added more depth to the setting than any of the silly collectible relics and documents. (Funnily enough, after completing the game, I came back to it a couple times to try and collect them all for the 100% munchkin achievement.)

Another thing that surprised me pleasantly was the presence (and relevance) of skill and crafting systems. It doesn’t look like the game has enough XP and salvage to max out all skills and weapons (unless you’re a munchkin), so there’s even some potential for specializing in different styles for multiple playthroughs, most notably with preferring the ‘hunter’ (stealth, bow, silencers) or ‘browler’ (melee, dodge, axe) skills. Leveling up Lara and her gear was a lot of fun, especially unlocking new abilities and ammo types, and not only because of the awesome factor, but because these tie in with growing difficulty of combat and diversity of obstacles. The game keeps throwing new challenges and new methods at you almost till the very end, and that’s something I thoroughly approve of.

All in all, it hooked me at once and kept me hooked all the way through. It was fun, exciting, challenging but not frustrating, and I really had to think hard to come up with anything I wasn’t entirely satisfied with. Awesome.