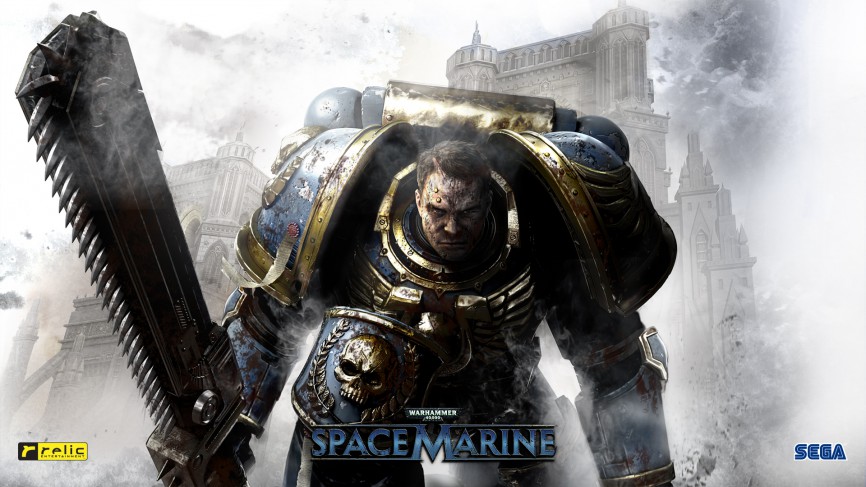 The Imperial Forge World of Graia is being invaded by the Orcs. Instead of an all-out retribution that would put the production of invaluable Titans at risk, the Ultramarines are deployed to resolve the situation before it escalates. But of course it does escalate when the forces of Chaos unexpectedly appear on the scene with an interest in a powerful artifact.

Epic, right? The straightforward and at times almost laughably predictable plot unfolds from the perspective of Captain Titus, the commander of the Ultramarines, as he shoots and cuts his way through innumerable foes to the somewhat surprisingly bitter end. Most of the time he is accompanied by his direct subordinate, the veteran Sergeant Sidonus, and a relatively inexperienced and by-the-book marine Leandros, although some missions he performs alone, while a few others are framed as large scale engagements. The courageous Lieutenant Mira of the Imperial Guard, the grim Inquisitor Drogan and the two archetypical villains, the ambitious Orc chieftain and the corrupted lord of the Chaos Marines, complete the cast of characters.

The game itself is a third-person shooter composed of entirely sequential objectives that invariably include fighting hordes of enemies with a fairly varied selection of ranged and melee weapons. The choice of weapons has tangible effects on the game, and allows formulating different approaches for different encounters. Titus can only carry a limited supply of ammo, and although it rarely happens that he actually runs out, the game makes it just scarce enough to keep you on your toes.

The melee is brutal, chaotic, and it’s easy to become overwhelmed; however, there’s a special (and extremely visceral) type of attack, the so-called execution, that allows Titus to regain a portion of health. An execution can be performed on Gretchins and corrupted Guardsmen without any special preparation, but for stronger enemies it can only be done after a special attack and sometimes involves a kind of quick-time event.

On the other hand, there’s the Fury mode, that gets charged by shooting or striking foes, and that, when triggered, allows you to execute any enemy in melee, or slows down time so you can shoot distant targets with great precision – while at the same time regenerating your health. Kind of cheap, but seemingly necessary in some situations (though mileage may vary).

And then there’s the jump pack you can equip for several missions and pretty much stomp over everything that stands in your way – once you learn to drive the thing, that is.

Overall the fighting is fun and rarely difficult enough to be frustrating (talking about “Normal” difficulty here; again, your mileage may vary). For the most part, the pacing is just right, with purely combat sequences followed by safe areas where the narrative is delivered through dialog with other characters. It’s a relatively short campaign, with 10-12 hours of gameplay (my guesstimate) and a solid learning curve that, in my case and entirely subjective terms, made the ending slightly easier than the beginning. There were only a couple of sequences throughout that I had to reload many times over, and these mostly introduced new or unique mechanics.

The game also possesses a multiplayer component, but I can’t say much about that, having only played a couple cooperative Exterminatus matches with a friend. In this mode, up to four human players fight hordes of Orcs in up to 20 waves of increasing difficulty on several different levels, with the goal of surviving the onslaught and occasionally carrying out objectives. Players can choose between several preset loadouts and later make their own with weapons and gear that they unlock by playing and leveling up. The main difference in mechanics between the SP and the MP (as far as I discovered) is that there are no executions in the MP, also no Fury, and health regenerates constantly but at a slow pace. More than anything else, the MP (at least in Exterminatus mode, there’s also PvP that I haven’t tried), seems like brainless entertainment that’s not likely to keep me interested above the most superficial level. Which is just as well.

But back to the campaign for some concluding remarks related to the esthetics of the game. I was impressed by the visuals and I paused to admire them on more than a few occasions. A couple months back I played the Dawn of War (a strategy game set in the same universe and developed by the same company) and now it was very satisfying to see the same imagery come to life in full size and detail. While I’m not usually a fan of oversize armor and weapons, the raw immensity of the architecture, the cavernous interiors and huge machinery complement and compliment the character design.

Add to that the excellent soundtrack, adequate voice-acting and entirely decent facial animations and you end up with a game that’s not only fun, but also surprisingly easy on the senses.

I may even be tempted to play it again!