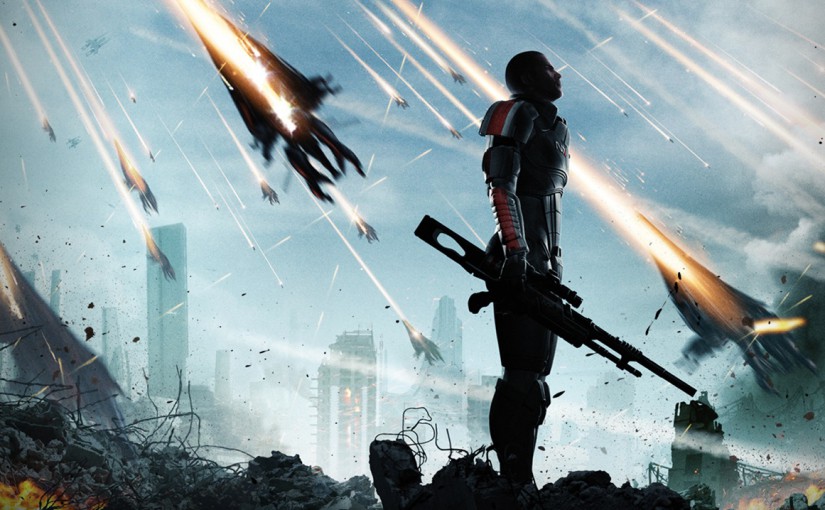 There has been a huge shit-storm in Mass Effect fandom over the way ME 3 ended. I can’t say I’ve been on the forefront of these… discussions, but some of my friends have been affected by the depression and have kept me informed on the hopes and fears boiling within the community. Like I said elsewhere, I think the particular ending(s) have little to do with the high emotions; I think the fans are mourning the passing of the entire series.

I for one, liked the way the game ended. Oh, I was appropriately devastated for some hours after the finale. I poured myself a glass of wine, then another, and another, and stared at the empty street from the window of my upstairs apartment, thinking heavy thoughts and listening to the distant echoes of my sleepless city. The climax didn’t fail to trigger strong emotions. I was sad and proud, and strangely exhilarated. But I was not depressed.

The pessimistic, fatalistic outlooks at the future for the setting that people I talked to seemed to be focused on pissed me off for some reason. Perhaps because the rabid optimist in me can’t stand the atmosphere of hopelessness and starts suffocating quickly. I am, of course, tempted to sit down and write at least one possible happy end scenario in the form of a fanfic, but tied up as I am with Ghost, I don’t think I have it in me to take on such a serious project. But I believe that the survival of the setting is not only possible: it’s a good way into probable.

Now, there are two ways to look at both the endings and the outcry of the fandom. The cynical perspective sees the devs rubbing their hands: they made the ending less than satisfactory in order to release other, better endings in the shape of costly DLCs and make even more money. The optimistic, and need I say, my perspective sees the devs making  their final stand, and finishing their work of art the way they see fit, damn it, not they way the fans wanted it.

I suppose the truth will come up in the following months.  While I am optimistic, I am not so blind as not to be braced for the possibility that I’m wrong. If a DLC with an alternative, happy ending appears in a month or so, it will be clear it had been planned all along; if it appears in three to six months, it will be clear that the devs decided to seize the opportunity after facing the violent reactions. But if it doesn’t appear… then I’ll be satisfied.

6 thoughts on “I Like the Way Mass Effect Ends”