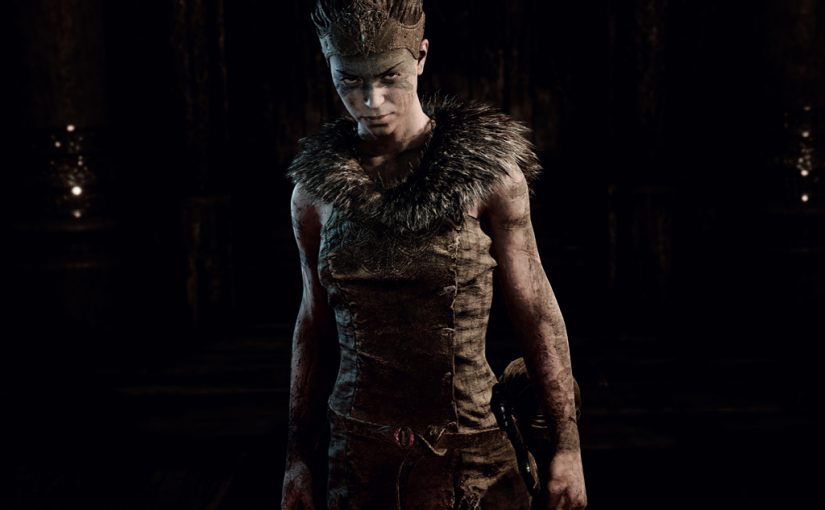 This unique game draws the player into the frightening world of Senua, a young Celtic warrior, as she’s pushed over the edge of sanity upon discovering that her lover has been tortured and killed by the Vikings. She launches on a dream quest to wrest his soul from the clutches of death, a journey that takes her — and the player with her — through the depths of her personal hell. It’s an experience both disturbing and deeply touching, deeply human. A story of love and courage in the face of torment and despair, presented through incredible acting, stunning visual and audio effects, and last but not least, engaging and fun gameplay. Hellblade is one of those very rare games whose value reaches far beyond good entertainment.

The established game developers at Ninja Theory set out to produce a mid-sized game of triple-A quality but with a mind to try something different and challenging despite the limited resources. They tackle the sensitive topic of mental illness after due research and extensive consulting with domain experts and people with first-hand experience. The result is a thoughtful and effective representation of the subject that many people who suffer from troubles similar to Senua’s found familiar, true, and helpful.

As a game, Hellblade delivers in many aspects where most games, even my favorites, either fail or don’t even try. It tells a simple, personal story that does not deal with fates of worlds or attempts to elevate the main character (and by extension, the player) to divinity.

The setting, superficially similar to the stereotypical medieval fantasy we’ve all seen in countless other role-playing games, actually has a purpose in Hellblade, and serves it well. It plants the seed of doubt in the mind of the player as to what’s “real” and what’s “just in Senua’s mind”. For all we know, many of the fantastic elements of the story might be entirely real within the setting, if we assume the setting is itself fantastic, despite the glaringly obvious fact that Senua’s seeing things that are definitely not real even within the setting.

The game doesn’t provide a definitive answer to this dilemma. While playing, I fully expected her to succeed at resurrecting her dead lover in the end, perhaps by finally “waking up” to realize he wasn’t really dead to begin with — or, according to Senua’s plan, by fighting, begging or bargaining with Hela, the goddess of death, to reclaim his soul. I was under the impression that, while many stages of her journey obviously did happen entirely in her mind, she did traverse some geographical distance too, and that some of the landmarks, like the Viking monument, were real destinations. But who knows? It is entirely possible that the whole game unravels at dream-speed while she’s kneeling in the middle of the sacrificial grounds, surrounded by charred and crucified corpses, clutching her blade as she battles the darkness within, and never makes a single step in the physical world.

To me it seemed that, along the (physical) journey, Senua drifts in and out of her darkness, and regularly gets lost in geographical areas she used to be familiar with. She finds her way by reconstructing patterns rooted both in cultural and her own, personal, symbolism. These are represented as elaborate spatial puzzles that rely on the interplay of color, light and perspective, and often depend on recognizing that an object might appear as something entirely different if seen in a different way — which ties in with the underlying theme of the story.

On the other hand, the combat sequences were plainly not real, with enemies blinking in and out of existence, and victory critically depending on Senua’s ability to focus. Combat is organized in waves; the only resource to keep track of is focus, which allows Senua to slow down time and execute many (often deadly) moves against essentially helpless opponents. Focus charges with successful parries, dodges and hits, and gets disrupted when Senua takes damage. It even allows her to get back into the fight after being incapacitated. I mostly found the combat enjoyable, but I got very angry with it on a couple occasions:

Soon after beginning the game, Senua is afflicted with “rot” that makes her sword-hand black and gooey, and we’re told that this rot will spread every time she fails (basically, when she dies), and that, when it reaches her head, she will have to restart her journey (basically, game over). Ultimately, this threat turned out empty, as the rot seemed to progress or regress in certain key stages of the game as if scripted, regardless of how well or how poorly I handled fights (and other deadly challenges). But it’s nevertheless a mechanic that does not by any means encourage learning through repetition. Yet there’s no other way to learn! There are the key binding settings, and there are the helpful voices that whisper instructions and warnings during fights, like “defend yourself!” (when a parry is appropriate) or “behind you!” (when an enemy spawns outside the line of sight), but there are no tutorials on how to use the moves, there isn’t even a heads-up display. I only learned near the end that the “melee” button executes a kick, useful against shielded opponents, and I never managed to figure out how to use the charged heavy attack. Who knows what else I missed. This is why I felt cheated when the game threw me into prolonged, difficult fights that often introduced entirely new enemies and mechanics, with Senua helplessly regarding her rotting arm to remind me that if I fail over and over, I might be forced to abandon the game and start over!

In retrospect, I think all the fights where I felt this was a possibility were simply overlong. Filler, to make up for the shortness of the game — a trait inherent to well-focused content, but presumably unpopular among the majority of players. In the end, I succumbed and switched the difficulty setting from “Auto”  (whatever that means) to “Easy”, which resulted in difficulty scaling down significantly after the first failure in a combat sequence. I do wonder what the game would look like on the “Hard” setting. Perhaps I’ll give it a try now, that I’ve had the cinematic experience I wanted.

The non-combat (but deadly) challenges reminded me a lot of Amnesia, but I was never truly frightened. I think this was mostly because combat scared me more, but I remain convinced that in order to cause fright, a game must instill a sense of helplessness, and removing combat altogether seems to be much more effective at that than just limiting it. This isn’t to say Hellblade failed at representing fear and helplessness — in fact, the rich, personal and paradoxically, realistic background of Senua’s panic makes for a far more rounded experience.

I wish there were more games like this. Courageous, artistic, rebellious. Games that won’t be everyone’s cup of tea! Like good literature, Hellblade is a thought-provoking experience to both enjoy and learn from.