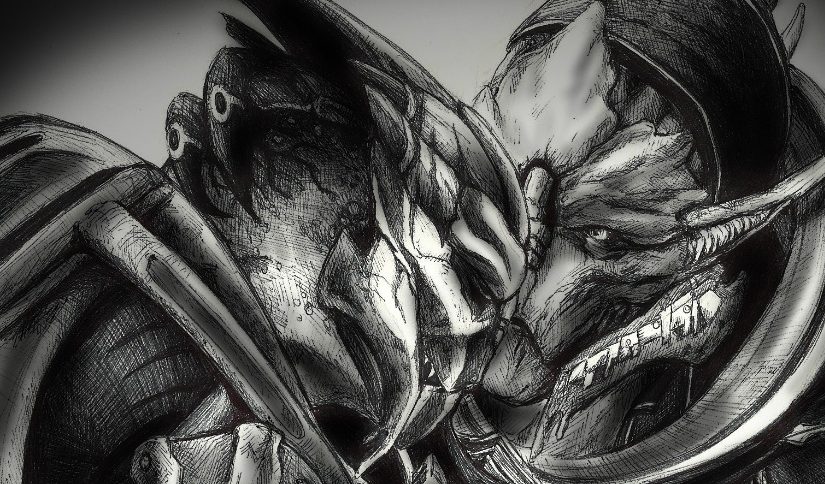 In an attempt to get back to writing fanfiction for Mass Effect, I’ve been reading and hesitantly poking at some old unfinished pieces. Among them was this rather long short story (about the length of The Candidate), about Saren and Nihlus, of course, tackling some unusual and heavy issues. Like the others, it was unfinished, but unlike the others, it was really close to being finished. I don’t know when exactly I started to write it, but it must have been way back in 2013. When I picked it up a few days ago, it read almost like a fresh piece of (not very good) fiction that I’ve never seen before. Yet I had no trouble whatsoever understanding why it had gone unfinished. At the time when I started it, I simply didn’t know how it should end. The only way I could see it ending was in total disaster, whereas I wanted it to be a learning experience for the characters. Reading it five years and a lot of diverse experiences later, I realized that now I do know how to finish it. And I set out to do it.

Now comes the interesting part. It’s a bit convoluted, so please bear with me.

As a part of the newly-written dialog, one of the characters stated that it’s been three years since a certain Very Important Event. The number of years was totally arbitrary. I needed a time span that would be significantly longer than a month but not as long as to be infeasible in terms of the Saren/Nihlus relationship. When I did this, I had no idea where exactly this story fits in the chronology of the said relationship. It was the first thing off the top of my head, and since I knew I’d be revising the crap out of the whole thing sooner or later I didn’t give it too much thought — that day.

But it came back to haunt me the next day. I was thinking about how the scene should develop after the introduction of that three-year period while I was making lunch and the more I thought about it, the more important it seemed that it should be no more, and no less than those three years. Especially less.

Then I remembered that there is something in the story that can potentially date it. Namely, it picks up directly after one of the famous Misfires, which in turn picks up directly after my own misfire-wannabe ficlet, About Art. For some reason, that ficlet resides in a file titled “Art in 2183” on my PC, so it seemed reasonable to assume — busy as I was, making lunch, and unable to look into it at once — that it was dated in 2183. Consequently, the current work in progress would be placed in 2183 too. And that would be unfortunate, as 2183 is the year when Mass Effect 1 happens, and Nihlus is inevitably killed. Awful as that is on its own, it’s even more awful in the context of this work in progress and the ending I was so happily constructing for it. An ending that rather demands a decent amount of future ahead, or it might as well be the disaster I couldn’t find my way out of when I was starting with it.

Another consideration dawned on me later, and added to my anxiety. Not only am I constrained by the dating of the Misfire and the ficlet — but also by the dating of the Very Important Event that happened those three years before, which happens to be listed on the Saren/Nihlus Timeline. I can’t retcon any of these dates, because they’re the fruit of collaboration with Misfire Anon and therefore sacred. And the likelihood that the three years, so arbitrarily picked for the work in progress, might miraculously satisfy these two independent and separate date constraints just like that, seemed very minuscule indeed.

I obsessed about this until the evening, when I finally had time to resolve the issue by 1) looking at the timeline and 2) looking inside the ficlet. The timeline fixes the Very Important Event in 2176 (I bet you’ll never guess what it is). So if the ficlet was indeed set in 2183, I was doomed! But as it turns out, my document title was wildly outdated, and ficlet is set in — wait for it — none other than 2179.

I rest my case.

In a comical failure at reading comprehension, I managed to misread the date of the Very Important Event. It’s not 2176, but 2177. While this is by no means a tragedy — I’ll just have so change the dialog in the yet unpublished story to “two years” instead of three — the dramatic coincidence that caused me to write this post in the first place has thus been debunked.

The story in question is finally done: After Hours.