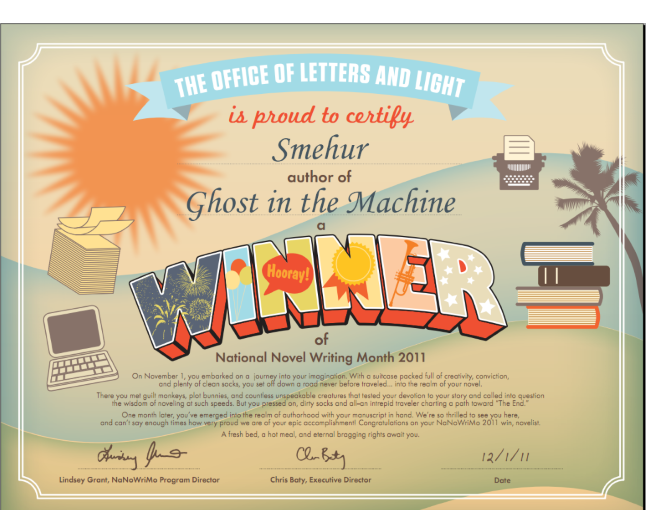 A couple of weeks ago I wrote about taking the plunge and participating in NaNoWriMo 2011, and then, a couple of days ago, about finishing a 63000-word rough-draft for a novel in a month, averaging at over 2000 words per day. It’s not really over, though.

I very much intend to keep up the pace, because, you know what? It’s doable. Writing 5000 words a day, like I’ve done a few days back, during the hectic, feverish, end run, isn’t. But 1500? 2000? Totally doable. Turned out I can comfortably do 500 words an hour if properly inspired, and even up to a 1000 if really excited (or pressed to meet the deadline). Of course these are not the numbers that count towards the final, polished copy. With edits and additions and deletions included, the realistic numbers are probably a half of that or worse. But still. Devoting two or three hours a day to writing is well within my ability, given the work, the family, and the nonexistent social life. And by the Spirits, I am going to use it.

I’ve never finished something this big. Lately I’ve proven I can bring a short or a medium-length story to an end, but all my previous attempts at novel-like projects fell apart, typically near the finish-line. I’ve come close to 100000 words with my big rewrite of the story of Oblivion and decided it was crap and in need of immediate restart in chapter nine out of ten. God, that was stupid. And that’s the lesson learned from NaNo: cringe and curse and gnash your teeth, write it even when you know it’s crap – until it’s done. Fix it later.

I have another Mass Effect project that wasn’t supposed to be as ambitious, but turned out to demand the counts in the five digit range, and just like the other failures of my past, it started stalling on that last hundred yards. But knowing what I know now, I am definitely going to finish it. Like, next week! I feel like I could do anything! And for that, NaNo has my eternal gratitude.

The novel (and still it feels weird calling it so), titled “Ghost in the Machine” (not very original, but more than a little relevant), is a massive Mass Effect AU where Nihlus Kryik, the turian Spectre, whose death by the hand of Saren Arterius, his fellow Spectre and a friend, opens the plot of the games – doesn’t die. The changes ripple from there, but I can’t say much more without giving away secrets. Of course, once I’m done with extensive editing that I’ve got planned, I’ll post the… novel… on FFN. Until then, a summary and an excerpt can be found here.

One thing I know for sure: I am so doing this the next year too. By then I hope to be ready to swim out of the warm shallows of fanfiction and into the high seas of original fiction. Already excited!

One thought on “Wrote a Novel in a Month”