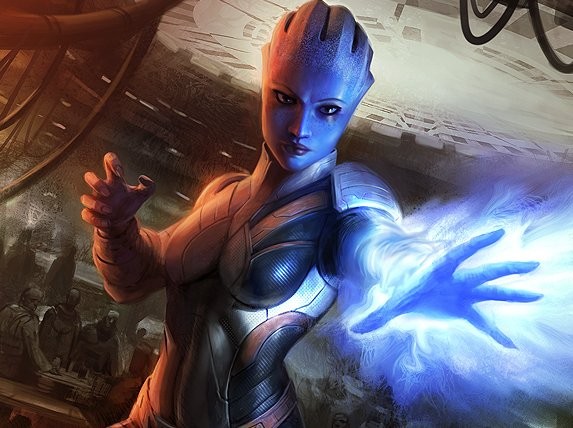 Asari are the most developed spacefaring society. They were the first to discover space travel and reach the Citadel. All asari are biotics, presumably because their home planet, Thessia, is extremely rich in eezo.

The most striking racial characteristic of asari is that they are mono-gendered: they are all female. While they don’t need to have sex in order to reproduce, they can, and apparently, like to. Asari reproduction is based on their telepathic abilities, and can be initiated with a member of any gender or species, not only their own. The act of telepathic contact, the purpose of which is primarily reproductive, is called melding, and it enables the asari to tap directly into the thought processes of the partner.

Asari have very long life-spans, on the order of a thousand years. Young asari are called ‘maidens’ and are typically expected to be restless and adventurous. Middle-age asari are called ‘matrons’ and it is during this stage of their lives that they seek to form a family and have offspring. Elder asari, or the ‘matriarchs’ are few in numbers, and are responsible for guiding the entire asari society as both spiritual and political leaders.

The asari representative in the Citadel Council is Councilor Tevos. 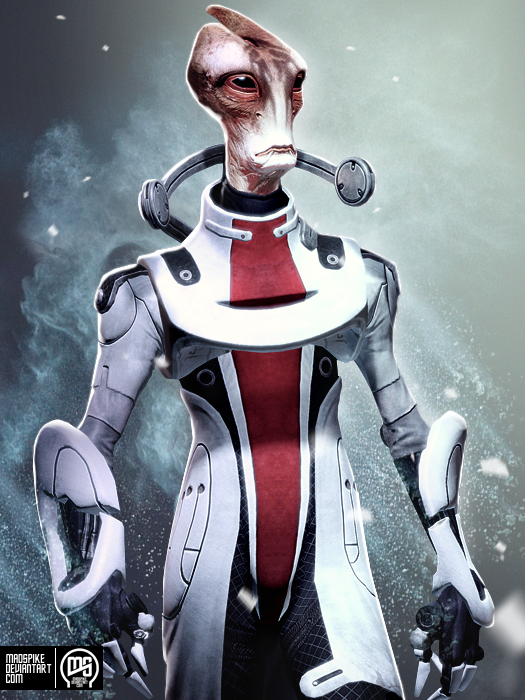 The second space-faring species to find the Citadel were the salarians. Of the three constitutive races, the salarians are the least humanoid. They are short-lived, and for all intents and purposes, asexual. Physically smaller and weaker than the other species, they make up for it by being highly intelligent, efficient and pragmatic. If the asari can be said to fill the archetypal role of diplomats and negotiators, then the role of the salarians is one of spies and scientists. Their native world is called Sur’Kesh, and they are represented in the Citadel Council by Councilor Valern.

The most interesting characteristic of turian appearance is their plating. They possess a sort of an exoskeleton made of metallic cartilage. The purpose of these plates is to protect from radiation: they do not offer substantial physical protection and are not to be considered as ‘natural armor’. 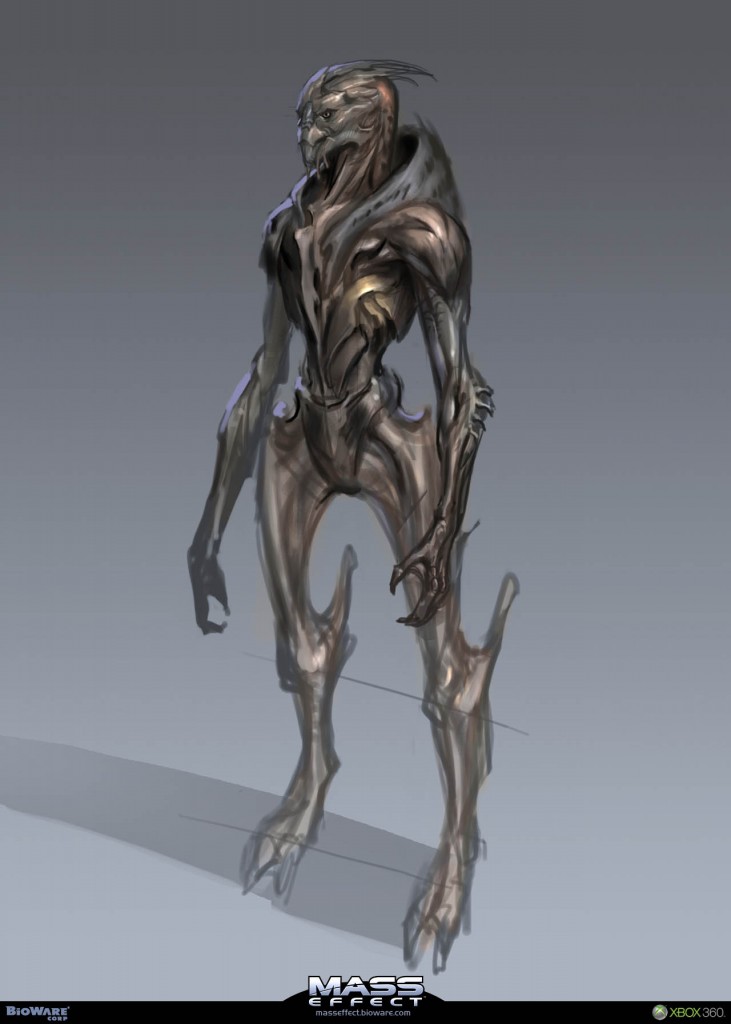 The facial plates that give the turians the appearance of wearing masks, have little mobility and are therefore believed to have a limited capacity to form facial expressions. Turians seem to use their mandibles to communicate both strong emotions and subtle moods, and there is a tentative consensus among the fandom that they also use their multi-tonal voices to convey complex feelings and ideas.

In my stories, turians speak in three registers: the ‘normal’ or middle tones, the undertones and the overtones. Humans hear the middle tones, and register the other frequencies in the form of ‘flanging’, which turians use to encode complex expression and emotion, making up for the relative immobility of their faces. The ‘flanging’ is not under direct conscious control, like body language in humans, and it makes it difficult for turians to lie, for example.

The strange structure on top of a turian head is called the crest or the fringe, and it is generally believed that the region beneath it is an erogenous zone. Since turian bodies are almost entirely covered by plates (which would have about the same sensitivity as human nails), every part of ‘unplated skin’ – such as the waist, the inner thighs, the back of the knee and so on – is believed to be vulnerable and sensitive. Turians have internal genitalia, hidden behind pubic plates that open when the turian is aroused. The strange things growing out their calves are called spurs, and the turtle-like hump on their back – the collar. 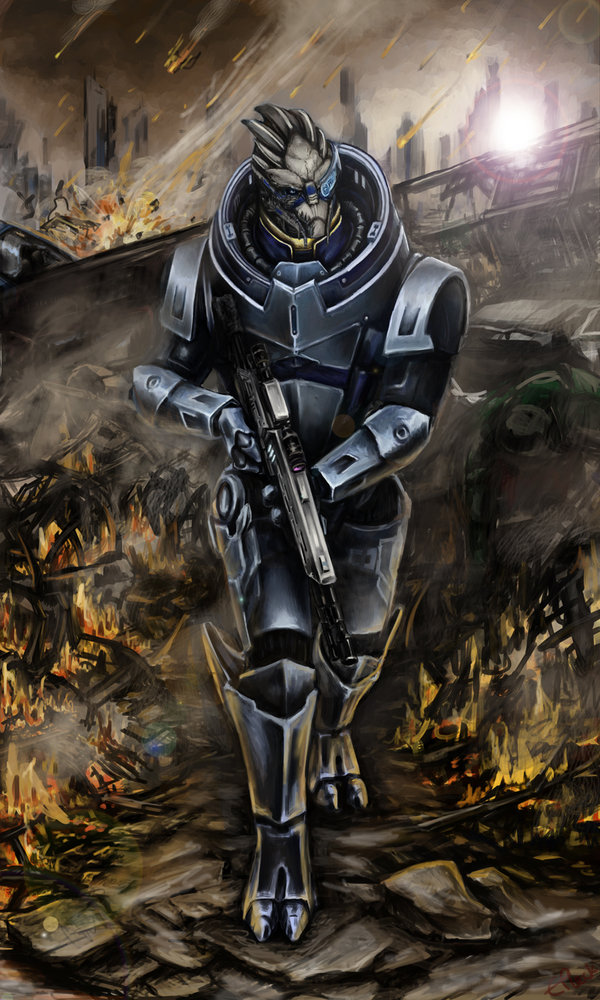 But enough about anatomy. Turian society is a militaristic meritocracy. All turians go through military training, and their place on the social ladder, which consists of ‘tiers’ is entirely determined by their own worth and effort. While this implies a culture of strict rules and discipline, turian culture is based on a great deal of personal freedom and responsibility. In a nutshell, a turian may do whatever he wants – be it indulgence in alcohol, drugs, or kinky sexual habits – as long as he carries out his duties. Next to the gentle asari and the eccentric salarians, turians fill the role of honorable warriors, the galactic peace-keepers.

By virtue of the First Contact War, there’s a degree of animosity lingering between turians and humans. Also, rivalry, because soon after joining the galactic community, humans asserted themselves as a military force to be reckoned with. In ME, humans are primarily depicted as aggressive and adaptable. The ‘elder’ civilizations see them as a sort of bullies, but also count on them to do their share of the dirty work.

There are many more species of aliens in ME. I’ll only mention one more. 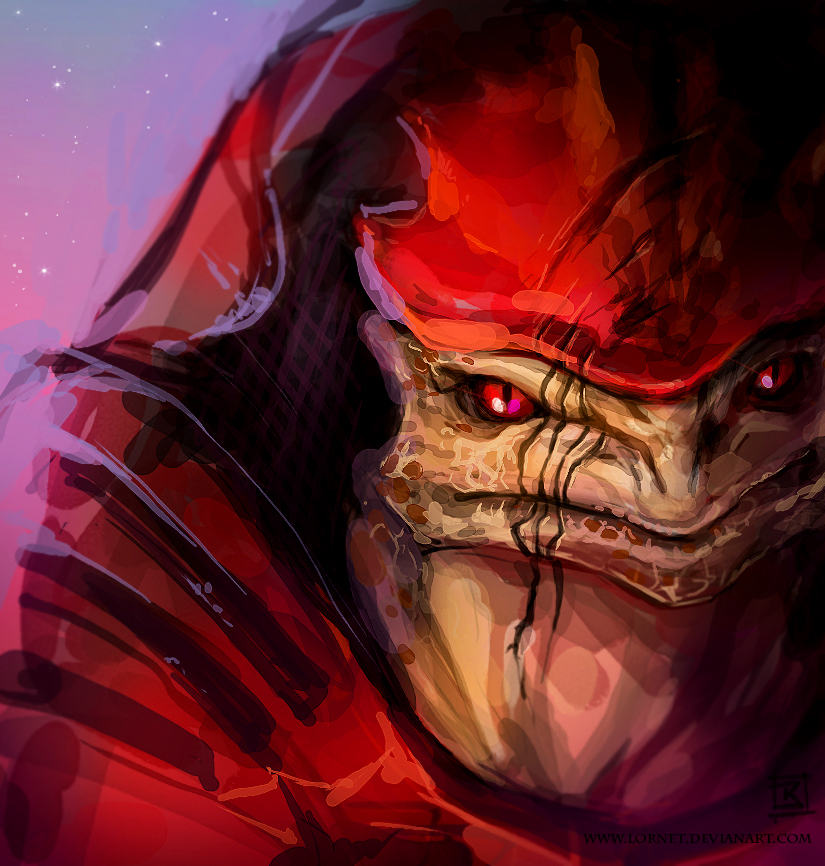 The krogan are a race of large, aggressive, lizard-like humanoids who are most often found roaming the galaxy as mercenaries. They are formidable warriors, and not only because all their vital organs are doubled, so that if one heart stops, the other can take over; their society is splintered into perpetually warring clans, and their home planet, Tuchanka, a nuclear wasteland. Turians entered the Citadel Council as a reward for stopping the so called Krogan Rebellions; the krogan were winning, and to turn the tide, the turians unleashed the genophage on them: a disease tailored by the salarians not so much to kill, but to prevent the krogan from multiplying. Although this war ended thousands of years prior to the events of ME, the genophage is still keeping the krogan population at a bare minimum, and for that, the krogan hate both the turians and the salarians.