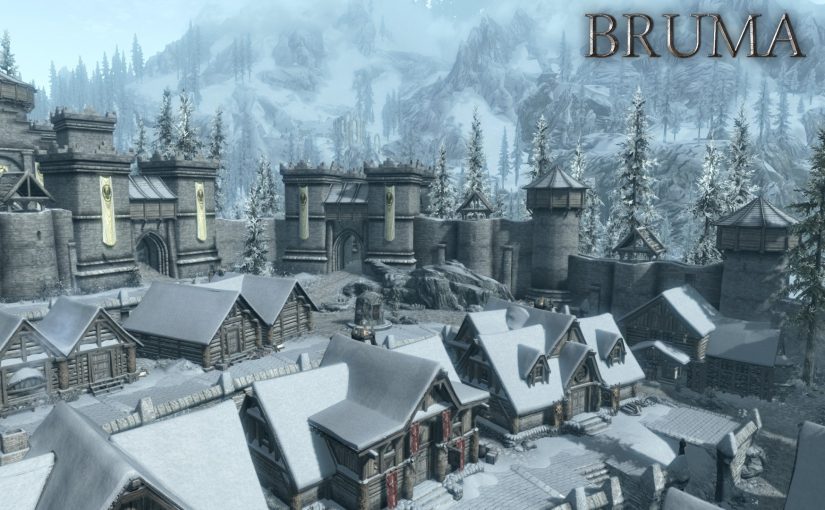 It’s not a witticism. Beyond Skyrim is one of those overambitious projects you sometimes hear about with regards to the highly modable games from Bethesda’s The Elder Scrolls series that aim to expand the already huge game world by adding new provinces or rebuilding entire previous games in the latest one. But unlike most (possibly all) of them, Beyond Skyrim is actually playable. And it’s excellent. The new content is of DLC quality, virtually indistinguishable from the vanilla game, and where it differs, it’s mostly for the better.

Obviously, I’m playing Skyrim again, and as usual, I can’t do that without a 100+ mods. In my previous three or four replays (that ended badly because heavy modding can destabilize the game; which is to say, I haven’t finished it yet), I stayed well away from mods that add new towns or regions filled with new NPCs and quests. I’m not too picky when it comes to the details of level-progression, combat or spell-casting mechanics; graphics improvements and fashions are easy to test and turn off it not satisfying; but until now I just never wanted to take risks with fan-created writing and voice-acting because I didn’t trust the modding community enough to deliver content that wouldn’t stand out in comparison to the main game.

Beyond Skyrim: Bruma is the first such mod that I dared try out and I am impressed. It fits in perfectly with the rest of the game. So much so that I could’ve been fooled into taking it for an official DLC. The landscaping, architecture and interiors are flawless, the quests are appropriate and slightly more intelligent than those of vanilla Skyrim (but not so much as to stand out!) and the NPCs are lively and, for the most part, have excellent voice acting. On top of it all is a professionally produced three-hour soundtrack, mostly liberally inspired by the music from Skyrim and other TES games but also featuring some exquisite original tunes.

This is not to say there are no problems at all. I’ve seen a couple objects with missing textures and encountered some dialog lines with missing voice-overs. The voices vary quite a bit in volume and some are very hard to hear; others (especially the nuisance characters whose role is to annoy you) are too loud. Some quests are under-directed; this is not a flaw in itself, but it stands in contrast to the hand-holding one gets used to with vanilla content. It’s not always clear what needs to be done or how, and the quest markers attached to NPCs are on occasion misleading. Last but not least, quite a few quests cannot be completed at all without a high enough Speech skill, which allows one to persuade or intimidate NPCs. This was a serious problem for my level 1 character who (thanks to an alternate start mod, Skyrim Unbound), took their first adventuring steps in Bruma.

But these are really just nitpicks. Overall, it’s been a great and, I dare say, a genuine TES experience. My prejudice against fan-created content is severely shaken, and I’m already thinking which one of the popular story-focused mods I should try next.

This particular Beyond Skyrim mod features only County Bruma. The project has the ambition to eventually add whole Cyrodiil and even some other provinces to the game. We’ll see if that will come to pass; I certainly hope so! It would be Beyond Amazing to see the Imperial City and other landmarks from Oblivion. I reserve judgment about expansions beyond that; it is one thing to imagine the content of Oblivion fast-forwarded into Skyrim era, and another to create content from scratch, or based on much older games, such as Morrowind and Redguard, or the much simpler ones, such as ESO.

Yet, seeing what I’ve seen in Bruma, I’d play anything this team makes. Hell, I’d pay for it! Makes me wonder why Bethesda hasn’t done this. It would probably take a relatively short time for a team of professionals with access to all the resources to make a DLC with this kind of content, and I’m sure millions of people would gladly buy it. Not that I’m complaining for having basically the same thing, free of charge. It’s the time required that makes the difference. I doubt this, and other mods re-creating different parts (and eras) of Tamriel in Skyrim will live on when TES 6 is out. But that’s another year in the future at least. Here’s to hoping this is enough time for Beyond Skyrim to have at least one other release.

Perhaps I can help make this happen. With my skills and experience, I’d be an asset in any modding effort. But before I offer my help to the Beyond Skyrim team, I should make some small mod on my own, both as a showcase and as practice. Of course, as with so many things, that’s easier said than done.