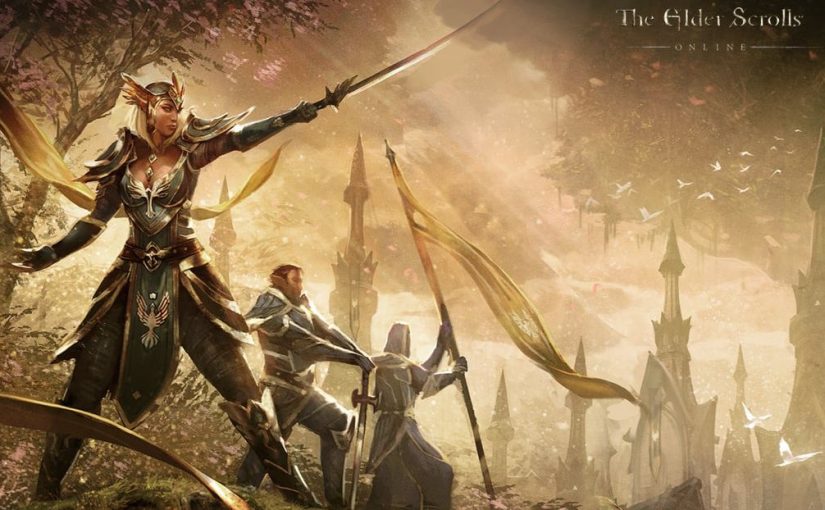 I’ve been a fan of The Elder Scrolls (henceforth, TES) franchise for a very long time now. My first contact with it was in 2002, with Morrowind, which blew my mind, and I played every major TES game that came out since. I was very excited by the idea of The Elder Scrolls Online (henceforth, ESO) at the time it was announced, but the demo which I played in 2014 left me unimpressed. I only bought the game in 2016 after Bethesda had made the monthly subscriptions optional.

ESO is huge. In every conceivable way. This is why I’ve been reluctant to write about it. Every aspect of it would need of a post of its own if I was to do it justice. So this is by no means going to be comprehensive and exhaustive. It’s just a collection of random facts and impressions.

The content, which has been steadily growing with yearly expansions and numerous DLC, is for all intents and purposes (at least when I’m concerned), infinite. Most single-player TES games so far were focused on and limited to one geographical area of the TES world, Tamriel, but ESO features all of them, with plenty of room still left for future installments. Every province, or in ESO jargon, zone, is a thematically and visually distinctive unit with its own flora and fauna, weather, architecture and (annoyingly) accents, as well as local narrative and dozens of fetch-quests. There is also an over-arching main story that constitutes or permeates a good part of the single-player content.

In the beginning, I mostly stuck to that: the (broadly-speaking) single-player experience and the main quest. Almost nothing in ESO is really single-player. Only a handful of quests will take you to solo areas where you can’t possibly encounter other players. What I mean by single-player is content that’s easy enough to be played solo by new players with low-level characters. I look back now at that period of my ESO career with a sense of wonder, in much the same way I remember my childhood problems and concerns. Everything changes when you first hit the level cap. The main quest is tailored to get you there, more or less, and when you finish it, the lack of direction naturally prompts you to dive into group content.

Before I delve into that, a few words on quests in ESO, main and side and random alike. They’re horribly stupid, superficial, unchallenging and boring. There is not a single one I’ve seen that isn’t, in one way or another, based on incredible incompetence of everyone in the world other than the player character. Occasionally, they aspire to tell wannabe stories with wannabe nuances and moral ambiguities but they fall flat because they’re too shallow, too simplified and too overtly intended for the lowest common denominator. The main story itself consists of only a handful of quests and they are crafted a bit better, but not by a large margin. The local story arcs and random pickup quests are a pointless time-sink. Not only are they insultingly stupid, they’re also insultingly trivial, poking you needlessly with tasks obviously within both the reach and the ability of the quest-giver NPC who sends you, the big damn hero, to fetch his runaway guar who’s peacefully drowsing in plain view across the stream.

I didn’t notice this so much in the beginning. But after I finished the main quest, I found myself unable to do any others. Minutes into it, the oppressive feeling of someone fucking with me and wasting the time of my life on complete and utter bullshit would build up to a physical sensation of choking. I started giving wider berth to overly friendly, overly talkative NPCs than to monsters. When the Morrowind expansion was released, I tried to give questing a second chance, as I felt vaguely motivated to revisit the region and culture that had initiated me into TES (and RPGs in general). But the ESO rendering of Morrowind felt like a parody, and the one major quest I attempted to do left me more convinced than ever that quests aren’t worth the effort.

Fortunately, ESO has so much more to offer. In their hundreds, the quests are still only a very minor part of the game — the single-player part. It’s with group content that come actual challenges that motivate self-improvement and turn the cogs of the in-game economy.

I’ve only had very limited experience with PVP. It’s only allowed in special zones: in Cyrodiil, where the three alliances — the Daggerfall Covenant, the Aldmeri Dominion and the Ebonheart Pact, each comprising five PVE zones and its own story arc that ties in with the main story — wage open war. By traveling to Cyrodiil, you become allied with the players from your own alliance and the players from the other two become susceptible to your attacks. Cyrodiil is a sprawling, mostly desolate region reminiscent of Oblivion, dotted with forts and their associated farms, mines and lumber-mills that the alliances can fight for and conquer. The alliance holding the majority of forts and resources at the end of a weekly or monthly campaign wins and the top-ranked player of that alliance is crowned Emperor. (You don’t get to rule, though. You just get a title.) PVP in Cyrodiil (and especially in the Imperial City, which is a content-heavy DLC), is quite nuanced and for all intents and purposes, a game of its own. I’ve only done as much of it as necessary to gain certain skills useful in PVE too.

The other, more recent forms of PVP are the duels, which can be initiated by any two willing players within PVE zones, and battlefields, where short matches between three groups of four players each, battle for one of the several possible goals (capture the flag, elimination and so on). I’ve not engaged in these.

On the PVE side, group content comes in the forms of world bosses, dark anchors (and local variants in zones added by expansions), dungeons and trials. World bosses and anchors are set in the open world PVE zones and their group nature is coincidental: while a high-level player might be able to do it solo, usually several people with characters at different levels will team up. Dungeons and trials, on the other hand, are for premade groups of 4 and 12 players, respectively, and automated matchmaking is done based on roles declared by the players: tank, healer and damage-dealer. Dungeons and trials come in normal and veteran variants, where the veteran version is more difficult, often with additional mechanics not present in the normal one. Not all of them are equally hard; the easiest dungeon is, as a rule, located in the starting zone of your alliance. Some can be done solo by high-level players, unless the mechanics disallow it (for example, if another player is required to free you from a snare that can’t be avoided). But in general, this content is challenging and often requires that all members of the group play their roles optimally. Dungeons and trials released with newer expansions and DLC are prohibitively difficult for casual players.

I’m mostly a casual player myself, and though I did dabble in some more obvious forms of optimization here and there, I never got close to tapping into the most challenging PVE content. I have done most of the vanilla dungeons and a few DLC ones on veteran difficulty, but I’ve only ever played a few trials (and I don’t think any of those were veteran). The inaccessibility of highest-level content inevitably makes the crowd who can and do play it elitist, and it’s not a pleasant arena to step into, unless surrounded by good-natured friends (as in, people you know in different contexts, not just people on your friends list). Seeing what it’s like, I stepped back from it. Even so, end-game content lurks in my consciousness as a motivation (even if somewhat abstracted) to get better and play other, not-as-difficult but still challenging content to obtain best-in-slot equipment.

But when I don’t feel like “working” on improving my build or doing repeated runs in the same dungeon to “farm” some specific armor set (see my recent post about Warfarm for my thoughts on farming), or using my hard-won stuff and experience to actually play some dungeon or trial, there’s still something ESO can offer. Namely, I find it very relaxing to just run around in the open world: to visit points of interest, unlock way-shrines and generally clear the zones of all collectibles while avoiding fights (and quests), picking up resources and — fishing. I know, right? Of all things.

Fishing in ESO is a sort of minigame. There are four kinds of fish that live in different bodies of water: sea-fish, lake-fish, river-fish, and sewer-fish. Each will only respond to a certain type of bait. Bait can be bought, but is more often collected as another type of resource: one that seems plentiful until you start spending it. Equipped with bait, you locate a fishing hole in a body of water, and stand next to it for about 10 minutes, throwing your line and waiting for the fish to bite. You can catch about 20-30 fish before the hole runs dry and you have to go looking for another. It’s a brainless, endlessly repetitive activity. So why would anyone want to do it?

Well, each zone has its own specialty fish in each kind of water, adding up to 12 special, named fish you can get as trophies while fishing in any zone. When you get them all, you earn an achievement, and when you get the achievements for all 15 or so original zones, you earn the much coveted title of Master Angler. The catch is… all these special fish are random drops with very small odds. You’ll typically catch 100 or more generic fish before getting a trophy fish in any type of water, and sometimes it takes quite a bit more than that. Having lots of generic fish does come with a reward of its own, however. When cleaning fish to make it a cooking resource, there’s a small chance the fish will drop a valuable ingredient for potions that increase experience gains.

And so, I’ve been fishing. A lot. I know it sounds ridiculous and I laughed as I wrote it, but the mind-numbing quality of it, supported by make-believe motivation outlined above, makes for a pleasant and rewarding pastime. Last year, I used to fish in ESO while watching professional Rocket League with one eye, and later, while listening to writing podcasts, as a way to unwind after work or when too tired to do anything creative or challenging. I’ve never been a TV person, but I suppose some people find TV relaxing the same way. It’s a thinly-veiled excuse to do nothing for a while.

I haven’t actually been playing ESO for several months now, since I started playing Warframe. But as I don’t aim much higher than casual play, I can go back to it at any time without feeling too bothered or outdated. In part, I wanted to write this now, while I still remember details, in case I never go back to it again, which is also possible.

I skipped over many things, such as the crown store, mounts, pets, player homes and cosmetics… to say nothing of inventory management, trade, guilds, materials and crafting. Like I said, ESO is huge and I can’t hope to really do it justice in a single post. Perhaps I’ll write more some day. For now, I leave you with this fabulous picture immortalizing one of the most entertaining moments I had with this game.